Hearts for a change 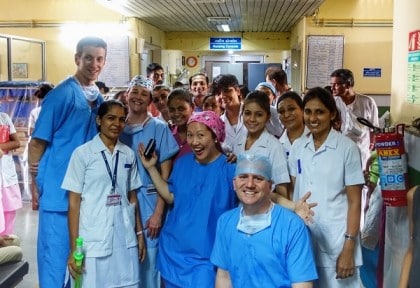 A cardiothoracic surgical team from Westmead Hospital sets up HeartCare India, an outreach program in Ahmedabad

Alone we can do so little, together we can do so much. A group of doctors from Sydney have proved this old adage with a shared mission of a team to help save lives in India.
HeartCare India, a program initiated by Sydney-based cardiothoracic surgeon Dr Himanshu Desai, helps educate, train and share knowledge at a leading public hospital in Ahmedabad, India.
In 2007, a group of doctors and medical professionals, including Dr Desai, then with Sydney Adventist Hospital, Wahroonga, travelled to Fiji to improve the cardiac health of Fiji Indian patients there. That’s when Dr Desai had a moment of realisation.
“It occurred to me then that if the Australian medical fraternity could stand up for another community of people in another country, why can’t I pay it forward to my motherland that gave me this career and these skills,” recalls Dr Desai.

Thus began the idea to take quality cardiac care to those in need, sharing experiences and skills.
“While it sounded great, there were several challenges when it came to execution, from establishing contacts to taking the idea to hospitals to set up an outreach program for cardiac care,” shares Dr Desai.
After mitigating several challenges along the way, Dr Desai and a team of 20 medical professionals provided valve treatments to five people in Jalgaon, Maharashtra.
“Jalgaon was eye-opening and there were many lessons learnt,” Dr Desai reveals. “It also sparked an interest to explore other parts of India to extend our services.”
As fate would have it, Dr Desai went back to where he began his career as a doctor – Ahmadabad, Gujarat, exploring hospitals to collaborate with.
“We wanted to make quality cardiac surgeries, post-operative care and cardiac health accessible for those who couldn’t afford it,” he says.
“It was my top choice then to collaborate with UNMCIRC – the UN Mehta Cardiac Institute and Research Centre (UNMCIRC). It is one of the leading government hospitals that has made heart care facilities accessible and affordable for the people. In 2010, I met the director there to see if we could create an outreach program where an Australian team specialising in cardiology could visit and share skills, new technology and best practices.”

The reason the hospital emerged as top choice was quite simple, according to Dr Desai. “Quality cardiac care is aplenty in India but it is mostly in private hospitals, which a lot of people can’t afford. UNMCIRC being a public hospital provides the same level of quality medical care but is far more accessible and affordable. It aligned perfectly with my vision for this program.”
In 2012, a 20-member team of surgeons, perfusionist, intensivist, nurses and a supporting medical team led by Dr Himanshu Desai went to UNMCIRC and took care of nearly 20 cases that included surgeries, pre-operative and post-operative care. The central focus of the trip was not to operate or treat patients, but to show the local doctors new techniques and educate them on providing advanced cardiac care to their patients.

“We started making a trip to the hospital every two years to share our skills and educate the India team,” says Dr Desai.
The medical team agrees that India is second to none in cardiology and top-quality medical care. “India is one of the leading cardiac care providers in the world but the public hospitals could use a little more exposure to advancements in technology and peri-operative care,” says Dhaval Ghelani, Intensive Care Specialist.


“Pre, during and post-operative care is one of the crucial aspects of cardiac surgeries that often get sidelined in India. It’s so important that it could impact the percentage of mortality rate,” he adds.
In their recent trip in June 2016 to UNMCIRC, for the first time, a specialised paediatric team including a paediatric surgeon joined the HeartCare India team. “Unfortunately, there are many kids with heart conditions requiring surgery and intensive care. The paediatric team worked on nearly 15 cases while the adult team took care of nearly 7 patients,” says Dr Desai.
HeartCare India not only travels every two years to educate and train the team in India, they also follow through and provide ongoing training programs via Skype.
“I make sure I follow up with the team in UNMCIRC and other hospitals I extend this service to in India. They report on improvements and raise doubts if any. Apart from frequent visits, I take lessons on Skype,” says Dr Ghelani. These follow-ups are significant and the team in India too responds with feedbacks on improvements they have implemented.
“It is very gratifying to know that that these visits have made a positive impact when the Indian medical team write to us about it,” says Rona Steel, Clinical Perfusionist.
The greatest sense of achievement for this team comes from knowing that the mortality rate after cardiac surgery in UNMCIRC is 4-5%.
“Before our first visit, the mortality rate was at 10% so it is a significant drop,” muses Dr Ghelani. “It equates to saving at least 150 lives a year, considering the average number of adult cardiac surgery is about 3000. This is still not enough. We want to bring the mortality rate to 1%, which would be on par with nations like Australia.”
The team plans more visits in the future to share, empower and improve the delivery of quality care.
- Advertisement -
Share
WhatsApp
Facebook
Twitter
Linkedin
Previous articleThe true taste of Indian chai
Next articleThe enduring legacy of Zoroastrianism