Indian Link Radio anchor CHARUTA JOSHI speaks to Harmanpreet Kaur, the 28-year-old all-rounder of the Indian women’s cricket team and recipient of the 2017 Arjuna Award, as she gears up for her second outing in the WBBL as a Sydney Thunder player 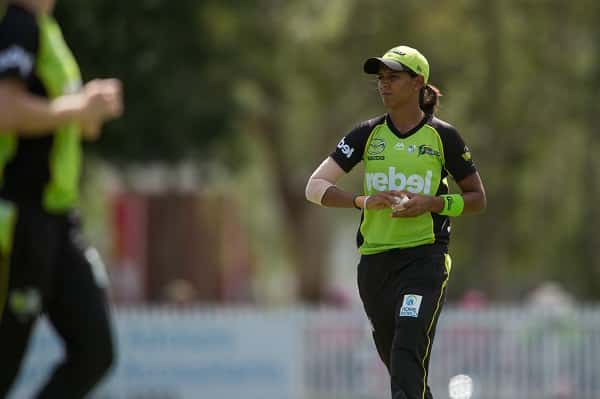 Reading Time: 5 minutesCharuta Joshi (CJ):  How did your journey in cricket start off?
Harmanpreet Kaur (HK):  Dad used to play cricket and I used to enjoy playing with him as a child. Luckily for me, my parents did not stop me from pursuing this interest of mine. I kept getting opportunities and finally got the chance to represent the country.
CJ:  Just like your dad, you played other sports as well. So what made you choose to pursue cricket at the professional level?
HK:  Yes, Dad was into a lot of sports in his school days. There wasn’t much scope for cricket at that stage. Things are different now, so when my time came, my parents encouraged me a lot, and never stopped me from pursuing the game.
I have played other sports too at the school level, but I’ve always loved cricket the most. Besides, Indians are big supporters of this sport, and so far, there has been maximum name and fame in cricket, so it’s all worked out for me.

CJ:  Who would you say is your cricketing hero?
HK:  My dad is obviously my first hero. He is the one who taught me how to hold the bat correctly and tackle the oncoming ball. At the professional level, my role model has been Virender Sehwag since the initial days. He has been a huge inspiration. It’s wonderful to hear the stories of his initial days of struggle. Now he is at another level, having represented India at the international platform for so many years. I first met him five or six years ago. We were scheduled to leave for England, and he happened to be in the same city. I had been asking to meet him for a long time, so I couldn’t believe my luck when I got the opportunity. He actually took out time, and waited for me, and we got to spend half an hour together.
CJ:  Tell us about your debut match against Pakistan in which you performed so well with the ball (4 overs, 10 runs).
HK:  I hadn’t slept the night before because not only was it my debut, it was a match against Pakistan! Now it feels good to play against so many different teams.
CJ:  You led the team as captain in the 2012 Asia Cup. Tell us about that match, again against Pakistan?
HK:  I got the opportunity to lead as both our seniors, Mithali Raj and Jhulan Goswami, were injured. But that also meant that there was a lot of pressure on me. It was a good match for me, eventually. The team performed well together and it turned into a memorable win for us.
CJ:  Talk us through the last over of that match, when India bowled out the Pakistan team still short of 18 runs for victory?
HK:  I had reserved the last over for medium pacer Niranjana Nagarajan as the Pakistan team were tackling spin well. The plan worked, and we managed to dismiss the team with five balls still left of the last over.

CJ:  How do you handle pressure?
HK:  Earlier, it was a big deal. Now, it’s become routine, so much so that I enjoy it. Playing against big teams on a daily basis, if one has to retain the team’s winning positon, you cannot afford to slip up on your schedule and discipline. Rather, the bigger the match, the greater should be your focus.
CJ:  Tell us about your selection for the Women’s Big Bash League?
HK:  It was last year that the Board of Control for Cricket in India (BCCI) allowed Indian players to participate in BBL and WBBL. Just the day after they granted the permission, I received the call with an offer to participate in the WBBL – I was thrilled! T20 cricket is one of my favourite formats of the game.
The first call I made to share the news, was to my father. He had been upset about the permission being denied up until then, so he too was very happy that I had got the opportunity straight up.
I had a good first year, and now I am back with a two-year contract, and really looking forward to it.
CJ:  How did you get this opportunity?
HK:  At the international level, it’s all about performing well. Luckily for me, I had been doing well against the Australian women’s team, and the selectors may have noticed that and followed my performance. Thankfully, I had a good season last year, and I hope to continue that form into this year as well.

CJ:  What do you think about the audience’s response to WBBL?
HK:  It’s fantastic! A huge number of people come to watch us play. The spectators enjoy the game, so they don’t care too much about whether it’s the men’s team or the women’s.
CJ:  What do you think about the way cricket is played here?
HK:  It’s aggressive and attacking on the field all the time, which is great because it gives me more energy and I enjoy this a lot more than having a defending approach to the game.
Here in the WBBL, you get a lot of privacy, freedom and the opportunity to just enjoy the game.
CJ:  So what’s your team like?
HK:  Besides Australian players, there are players from New Zealand and West Indies too in our team. Everyone is friendly, and it feels good to have friends from across continents.
CJ:  What changes have you seen in India regarding women’s cricket?
HK:  Oh, there have been a lot of changes, especially after the World Cup earlier this year. We have got so much love and respect! Cricket lovers actually watch out for our matches now, and enjoy our game, so it feels great. It also makes us want to perform better and keeps us fit and going. Thankfully, a lot of sportswomen are doing well for India now, like in Badminton and Tennis, so these are good times. Earlier the adulation was just reserved for the men’s cricket team, so I wish for more power to Indian sportswomen.
CJ:  What’s your message to youngsters looking to pursue their dreams, just like you?
HK:  Whatever you do, do it from the heart, and enjoy it. The results are secondary. The idea should be to remain calm and focussed. Equally important, respect your elders.
CJ:  And your message to parents?
HK:  Support your children’s dreams, and give them freedom instead of pressurising them. It’s all about mutual trust

Up Close and Personal

Favourite sport (other than cricket): Football

How you unwind: By watching films

Last film you have seen: Firangi

One person/thing you are missing while away from home: My mum, actually!