“Food is my religion” 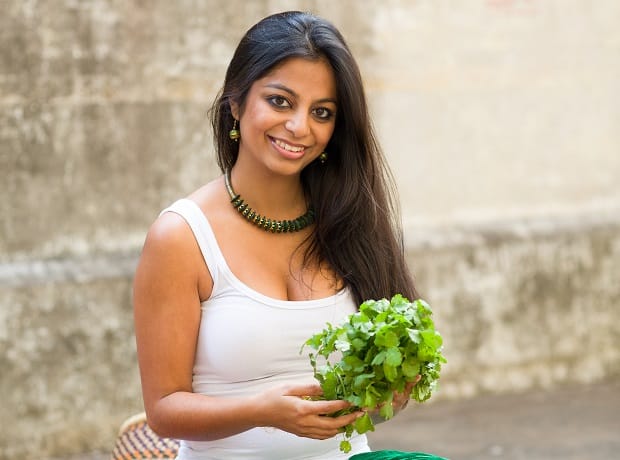 Cardamom sprinkled in a rich, thick cream inspired by the kulfi. A mango, honey and yoghurt-based ice cream tasting like an Indian Lassi. Chocolate ice cream with orange pieces and a subtle hint of Indian spice blend to tingle the taste buds. Spiced tomato chutney with a twist from her mother’s kitchen in India. These are some of the Indian-inspired products that recently took out the Royal Melbourne Fine Food Awards 2014, and describe a food journey at its best.

Brisbane-based Neha Sen, a MasterChef Australia contestant in 2013, has mixed and matched Indian flavours with the best of Australian produce in her recently launched range of ice-creams and chutneys. After her Queensland launch at the Regional Flavours event held at South Bank, Brisbane, Indian Link caught up with the lovely and chatty Neha to get an insight into her delightful relationship with food.

“Food and cooking are my best friends,” Neha said. “I have experienced the highest of highs and got through the lowest of lows through food”. Her earliest fond memories of food are of sitting around a table eating with her family back home in India – during breakfast there were already conversations on what should be cooked for dinner. Her relationship with food is so strong that she says, “Food is my religion and gourmet markets are my church. I cannot comprehend a life without great food”.

Her Australian journey with food began with the MasterChef 2013 series, where she hurriedly applied with only four hours left before the deadline. It was surreal when she received a call from the production team, she told Indian Link. Her homemade cardamom ice cream and chutneys impressed the judges, and she secured her place among 23 other contestants. Neha was the only person selected from Queensland.

Through MasterChef she learnt a lot from fellow contestants and the judges. Facing life after the show, Neha clearly remembers the words of judge George Calombaris. “He said, ‘it does not matter where you finish, you just have to have a go'”. Emerging outside from the MasterChef kitchen, Neha says she was a completely new person. “I became gutsy and stronger. I didn’t doubt myself anymore and was ready to take on any risk”.

Coming from a marketing background, she realised there was no going back to her job, but instead had an idea of the new food path she wanted to tread.

“I wanted to introduce to the Australian palate something more than just butter chicken and chicken tikka masala, as India has a lot to offer,” Neha explained. She started creating Indian flavours, along with traditional Australian ingredients, in her home kitchen, using her husband Marcus as the first taste tester.

Using their savings that were kept aside for a new home, Neha decided it was time to take her foodie dream forward, taking her meals from the kitchen to the shelves. Last year she started meeting and collaborating with numerous industry experts to get the best results for her vision of marrying Indian and Australian flavours.

“I have been blessed to meet the right set of people,” she said. “It is through their goodwill that I saw my dream becoming a reality”.

Within the span of ten months, Neha’s ice creams and chutneys have found a place at niche delis in Melbourne and Sydney, and now Queenslanders will get to taste these wonderful products, available at a growing list of selected stores.

Neha is still pinching herself. “Sometimes I still feel it’s all a dream, it is quite overwhelming to see my products on shelves and being well received by Australians. Australia has given me the freedom to choose a new path and has given me the chance to explore my passion for food. MasterChef has opened the door, now it is up to me to take that chance!”

To all aspiring cooks out there, Neha advises, “Give it a go! Food binds us together, brings in love, happiness and cheer”. She currently has further plans to take her Neha’s brand nationally and also intends to introduce new flavours and products in the near future.