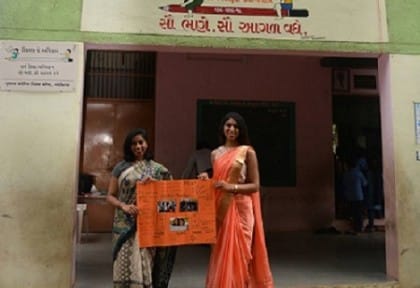 Members of the University of New South Wales Medical Students’ Aid Project (MSAP) are passionate about making a difference in health both globally and locally. Medical students Heeral Thakkar and Sharanya Mohan are the Projects Officers for the university society. Under the auspices of MSAP, they have established ‘Food for Thought’, a project designed to provide nutritionally fortified meals for 150 students at a rural school, Seem Shala Jibhaipura, in Nadiad, Gujarat. The aim is to improve childhood nutrition and school attendance rates, and also raise awareness about basic health through educational videos for the children.


Tell us about the Food for Thought project
In December 2015, Heeral visited Nadiad in Gujarat, India and met Kishore Bhinde, a plastics manufacturer. Once a year, he visits schools on the outskirts of Nadiad and provides wholesome meals to the children.
She accompanied him on one of these trips and realised that across all the four schools they visited, the children were lethargic, unable to concentrate and severely malnourished.  Sharanya and Heeral decided that they wanted to change this, and that is how the Food for Thought Project was born.
We provide a nutritional supplement three times a week to 150 school children aged between four and 12 years old. The supplement consists of milk with Bournvita, one fruit, dates and masala chana. This boosts micronutrients, such as Vitamin B12 and iron, and macronutrients such as protein.
We also send basic health education videos every four months to teach healthy habits like washing hands, staying clean, and other practices to prevent the spread of communicable diseases. When we visited the school in September, we saw how eagerly the children had watched the video we sent earlier in the year as they proudly displayed their handwashing technique!

What research did you do to set up this project?
Heeral knew about the “Midday Meal Scheme” (MDM) in India (a government program which provides one cooked meal per day for children in school), which made her wonder, “Why are these children still malnourished?”
She discussed these issues with Mr Bhinde and, after reading several journal articles on the MDM scheme, they found that many of the intended benefits of the program do not get to the children. The food is often unhygienically prepared, in small quantities and with no fresh fruits or vegetables. Gujarat, according to the Ministry of Human Resources and Development, ranked 25th out of all states in its performance in the MDM.
Who is involved in the Food for Thought project?
Locally in India, Mr Bhinde, voluntarily monitors the provision and purchase of food and maintains the accounts. He ensures that funding is used to maximum benefit for the children.  Another keen volunteer, Aashish Shah, takes the measurements of the children for our subcommittee to analyse.
How is the children’s progress monitored?
Measurements of each child’s mid-upper arm circumference, weight, and height are taken every six months and compared with World Health Organisation growth charts. We also compare school attendance on days which meals are provided with days on which they are not.
Our initial measurements revealed that 6 in 7 boys and 3 in 4 girls were below the 10th percentile for mid-upper arm circumference, and almost 1 in 2 girls and 2 in 3 boys under 10 were below the 3rd percentile for weight.

What happened during your recent trip to Nadiad?
We had the pleasure of visiting Seem Shala Jibhaipura over three days from 30 August to 1 September. We met the teachers, children and parents, and the incredible Principal Vasantbha Prajapati who sends date stamped images of the food provision every week.
Since the initiation of Food for Thought, the progress made has been beyond what we have imagined. This project has inspired the Collector to commission the building of two new classrooms to facilitate a Year 7 class and two new teachers! Additionally, a bore well has been built to have clean running water to drink and encourage washing of hands before and after meals and after using the toilet. A local soap supplier has also donated liquid soap to the school.

Good eyesight is very important for children to be well educated, so we decided to conduct eye checks for all the children while we were there. A team from the local charitable Santram Eye hospital, including a paediatric ophthalmologist and squint specialist, and an optometrist, generously donated their time to help conduct the eye checks. Some of the children had cataracts, corneal opacification, Vitamin A deficiency, and anopthalmos just to name a few conditions.
During our stay we took the second set of height, weight and mid-upper arm circumference measurements. It was warming to hear first-hand that due to the Food for Thought meals, parents encouraged their children to attend school. The children were bright eyed about their educational future, with many proudly proclaiming they are going to be doctors and engineers!
How do you see the project developing?
Despite all the progress that Food for Thought has made at Seem Shala Jibhaipura, the trip also revealed many avenues for expansion. There is so much more to be done! For example, the toilets at the school are unhygienic and decrepit. MSAP hopes to rebuild these along with toilet sinks by 2017.
In the next few years, we hope that the project will also extend to a second school, Seem Shala Chalapura, which currently has 40 students.
How can people get involved?

Everyone involved in this project is a volunteer. There are no administrative costs at all, we’re all just passionate students who are trying to make the difference we would like to see in the world. We would like to thank everyone who has supported us: the entire MSAP executive team, our Project’s subcommittee, and our families. We are also very grateful for the encouragement and positive feedback from the local community.
MSAP will be holding a Food Stall at the Deepavali Mela on 23 October at Parramatta Park. All proceeds will go to the Food for Thought project.
To find out more about the project, visit msap.org.au/foodforthought, Donate here or email  projects@msap.org.au
- Advertisement -
Share
WhatsApp
Facebook
Twitter
Linkedin
Previous articleThe rhythm of the night
Next articleAsk Auntyji: uninvited guests and stingy sisters