Fighting for her dreams 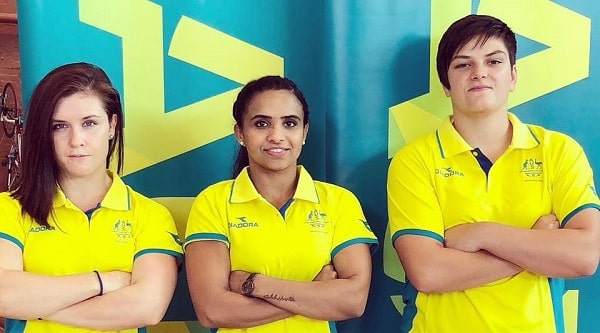 
Training.
Only days out from the big event, she’s currently training three times a day every day.
The 33-year-old is part of the Australian wrestling team for the upcoming Commonwealth Games at Gold Coast.

“I’ve been working with the national coach as well as my personal coach in recent months,” Rupinder told Indian Link. “I’m giving it my all.”
Looking forward to her second Commonwealth Games, Rupinder admitted she feels stronger now than she did at Glasgow in 2014. She credits this to her young Russian-origin coach Kostya Ermakovich, himself a seasoned international competitor.

Rupinder will take the floor in the 50kg category, alongside an old friend from India, Vinesh Phogat, who was made famous by a certain Bollywood hit film not so long ago.

Does she see Vinesh as a major competitor?
“We’ll see on the day, won’t we!” she laughed. “There’s also Jessica MacDonald from Canada and another strong Nigerian player in my category!”


But she is enjoying catching up with other friends from India’s boxing world Babita Phogat, Mary Kom and Sakshi Malik in various camps in the lead up to the Games. Her closest friend Navjyot Kaur, who represented India at Glasgow, will however, not be there this time round.
Glasgow is a memory that Rupinder has put squarely behind her. As someone who had always played in the 48 kg division, she was shocked when she weighed in at just over 49 kg before her selection.
The gain in weight meant that she would be placed at the next level, the 53 kg division. With but a week to go, Rupinder worked hard to lose the extra kilo, but ultimately weighed in at 48.2 kg. She ended up competing in the 53 kg division.

“I’ve been a steady 50 kg for some time now,” Rupinder revealed. “I’ve had a baby since Glasgow – who is now two. I weighed 70 kg after she was born and have worked my way down steadily.”
We are not surprised, especially after seeing her do her squats and HIRTS. She may be petite, but she is strong!
As a vegetarian, she is packing those proteins in with some hearty Punjabi meals.
Yes, she remains a simple Punjabi girl even after more than a decade in Australia.
She came here as a hospitality student from Tarn Taran in Punjab – where she felt shy to put on her first wrestling costume at school.
“I did not know a thing about wrestling in Australia, but I was hell bent on finding out”.
It was at a local Diwali function that a family member introduced her to Kuldip Singh Bassi, founder and president of the United Wrestling Club in Melbourne. Rupinder was back on the mat in no time. Before long, she was winning championships such as the Australia Cup.

To compete at the international level though, she had to wait for her citizenship to come through.

She won the bronze at the Commonwealth Championships at South Africa recently.

Rupinder started her fight career in judo as a Year 6 student. In Year 12 she was asked to give wrestling a try.
“Yes I felt a bit shy to put the costume on – with judo there had been no costume issues! Mum was concerned about injuries. But Dad told us both to stop being silly! As an army man he wanted his children to try as many new experiences as possible. My first performance came good, and I have never looked back”.
Kuldip Bassi, who also helped bring out Kostya Ermakovich from Uzbekistan in 2003, has been in constant touch with his ‘protégé’.
“I see a much stronger and more dedicated Rupinder these days,” he told Indian Link. “The training has been methodical and of a high standard, and she is much more determined herself.”

The hardest part about the training, she revealed, has been long periods away from her daughter. “We packed her off to India for 6 months to be with my mum. Mum has brought her back now and will be with us for a while. My husband Sikander is very good with the bub too and helps out a lot.”
As well, she admitted, the lack of a local sponsor has been worrisome.
“My team mates all have sponsors; some have three. It goes a long way considering we spend all day training. At the moment my husband supports me, but I wish my call out for a sponsor would be heard.”
There are many in our own community who sponsor events and shows and it would be nice to see some support from them, she added.
A medal at Gold Coast would also go a long way for the sport in this country.
“Wrestling ka status high level ka nahin hai (wrestling does not have high status),” she lamented. “Most wrestlers have moved in from Mixed Martial Arts or jujitsu, and there are just not enough girls, sadly. The team for Gold Coast has only 8 wrestlers, 5 males and 3 females.”

Rupinder follows fellow-Melbournian Sandeep Kumar, another Indian-origin wrestler, who represented Australia at the Beijing Olympics. Vinod Kumar, another Indian-origin wrestler was dropped from the Rio Olympics team after a failed drug test.
Days before Glasgow, we had asked Rupinder if she knew the words to the Aussie national anthem. You know, just in case.
“Bilkul aata hai jee,” she had come back then. This time round, she informs us that she’s been singing it frequently, together with her team mates.
Here’s hoping she gets to sing it a few times at Gold Coast.