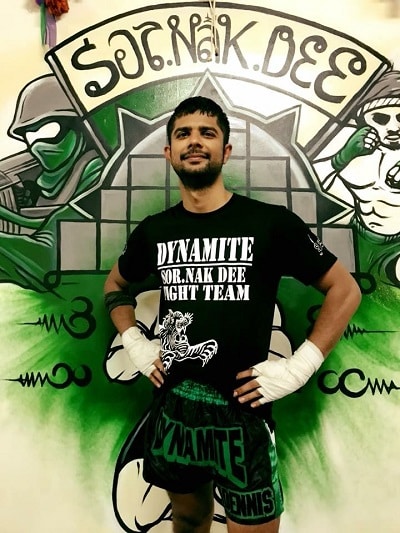 Reading Time: 3 minutesChildren with autism are having their lives changed with ground breaking research and education provided by the Olga Tennison Autism Research Centre (OTARC) at La Trobe University, Bundoora. Their research has found that early diagnosis and intervention can improve the child’s chances of becoming independent and achieving their full potential.
Despite these findings, fewer children are availing themselves of early intervention therapies.
When Pradeep Raj learned about the research and the potential for children to have their autism condition better managed with specific therapies, he considered how he could help spread the message.

To help raise awareness, Pradeep, a corporate advisor by profession, will be competing in a Muay Thai Kick Boxing event, organised by Dynamite Muay Thai Gym, on 25 February 2018 in Melbourne’s CBD. The challenge involves eight weeks of intensive training, diet management, weigh-ins and the final bout.
“I have never done anything like this before,” Pradeep told Indian Link. “However, the cause is what matters. If I can improve or save the life of at least one child through this awareness campaign, then the purpose of the challenge is served.”
When asked about the choice of event, he noted, “The Muay Thai challenge is dangerous and attractive at the same time. I believe this will draw people’s attention in my community to the underlying cause I am fighting.”
He encouraged everyone to attend the final match.
Approximately 1 in every 100 children suffers from autism, and the cause is unknown. No screening test can identify the condition. No child is born with it; however, symptoms manifest at 12 months of age.
Pradeep is positive that the research conducted by OTARC will lead to successful cases. He explains that the reason is simple: “neuroplasticity of the brain”.
The human brain is most open to change during the first couple of years of a child’s development. If autism is diagnosed and treated early, ideally within 12-18 months after birth, the young child’s brain can be moulded and directed towards an optimal developmental path.
Therapies such as speech therapy, occupational therapy, applied behaviour analysis (ABA) and the application of the Early Start Denver Model (ESDM) are proving to be helpful. These therapies are also supported by the Commonwealth’s National Disability Insurance Scheme.
Pradeep encouraged parents to check that their child does not have autism. “In my extended family and circle of friends, I have witnessed children with autism. It is sad to see them struggle when you know that early intervention methods exist,” he noted.
He reminded the community that parents need to understand that these kids do not grow out of autism naturally.
“By enlightening them with information on how to pick up early cues of autism, the child can receive the relevant early intervention therapies to help them develop to their full potential,” he explained.
OTARC has developed an app called ASDetect which helps parents pick up early cues of autism using an e-checklist for children aged at approximately 12 months. Once completed, parents receive an on-screen result of either ‘low’ or ‘high’ likelihood of autism, along with formal comprehensive assessment results by email.
In addition, the Autism Specific Early Learning and Child Care Centre (ASELCC) at La Trobe University has helped children with this condition utilising play skills, cognition improvement, communication enhancement, gross motor skills and fine motor skills. These tailored services are provided to children requiring childcare at no extra cost.
The OTARC has extended their research trials to countries including Poland, South Korea, Japan, Nepal and China. We hope India is added to their list soon.
All donations collected during Pradeep’s campaign will go directly to support research at OTARC. We commend Pradeep for pursuing a campaign supporting a great cause.
To support Pradeep, visit https://www.gofundme.com/pradeeps-fight-for-autism-awareness