FIFA flashback: From Russia, with love

15-yr-old Rohan Gandhi talks about the memories of FIFA 2018 that he will never be able to forget. 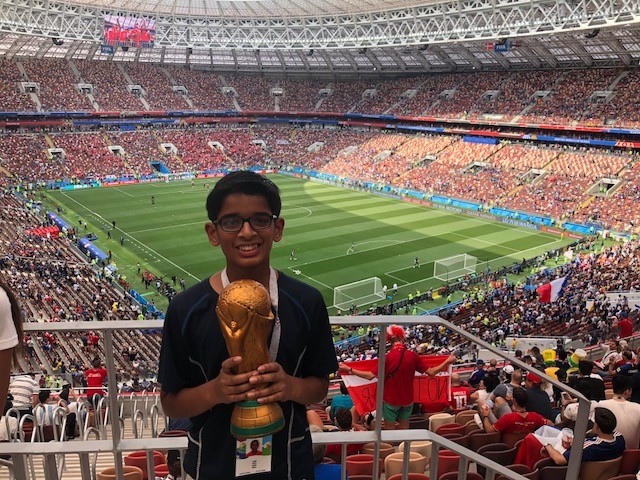 The world, it seems, has recently become hollow. Four years we waited, and now that the World Cup is over, we wait again. Now we can only reminisce.
For our family, though, this time the beginning of the tournament was more exciting than anything else. We were about to embark on the Russian adventure. Our scheduled departure left time for us to be viewers of the group stages. And the beginning fixtures set the tone for the entire World Cup, to say the least.
Whether it was Russia’s convincing win in the opening match of the tournament or a thrilling draw between Portugal and Spain courtesy of a CR7 special, this World Cup at its outset was exhilarating. But football isn’t celebrated by the 22 men that play on a field, it is commemorated by its worshippers who pay tribute to it off the field.


On our very first evening, we entered the Red Square. It was enchanting. The historical charm of the heart of Moscow (and Russia) was overshadowed by a footballing fete. People donned jerseys of their national team. Cultural congregations chanted passionately. There were seas of the blue and white stripes of Argentina, the yellow and green of Brazil; a myriad of colours adorned the Red Square. But the sight that captivated me the most was when individuals just formed a circle and knocked a football around in a game of ‘Keepy Uppy’. It didn’t matter what corner of the Earth you came from, it didn’t matter that we spoke different languages. We we were all connected by that one object: a football. And that illustrates the power of the beautiful game.
In retrospect, the fixture between France and Denmark could be remembered for all the wrong reasons. Primarily because it was the only match in the group stages that ended in a goal-less draw. The football was lacklustre, there was no threatening offensive play and it seemed as if both teams were content on playing possession and warranting a draw. For those watching it on TV, it was just another game. But experiencing the match firsthand is an entirely different experience.

There is a mesmerising presence surrounding the stadium; an electric atmosphere that is simply indescribable. And so the national stadium of Russia, Luzhniki Stadium, became the battleground of the formidable French and the gallant Danes. Even through the process of just walking to the stadium, the cheering erupted. “Allez Les Bleus” here, “Allez Les Bleus” there. The Danes may have had support, but they appeared like specks in a sea of blue.
And while all eyes were on the stars on the field, something has to be said about those who tirelessly assist behind the scenes, they are the unsung heroes. In this case, it was the hospitality and the enthusiasm of the Russian FIFA volunteers that enhanced our experience. They may not be acknowledged and are often overlooked, but fans are indebted to these selfless, quiet workers.

Coming back to the match, I now realise that I don’t remember the full 90 minutes of the match; only glimpses of Mbappe’s innovation or a well constructed Dane play. Yet the scenes before and after the game feel as if they were yesterday. The memory that will cling to me is when adjacent to the FIFA logo, the Danish and French flags were unfolded with the backdrop of the inspiring theme music of this 2018 World Cup; followed by the spirited recitals of the national anthems. It was a surreal experience.
This was a pivotal match for the mighty Socceroos. We needed not only an Australian victory over Peru but the French to dominate the Danes and end up on top by a margin (at least) of two. Sadly, it was not to be.

The next stop was Nizhny Novgorod. The lesser-known provincial town is a Russian gem by the Volga river; it provides some breathtaking views. On that day though, it seemed as if it lay on the border of Switzerland and Costa Rica. One of the characteristics of a FIFA match is unpredictability. You would expect that whilst these two teams boast of stars, they are small fish in an extremely big tank. And yet, this game reflected football at its heart!
The ball moved from one end of the field to the other with speed and skill; there was a certain elegance to the two-paced football. Every brilliant shot, every amazing save was accompanied by the “oohs” and the “aahs” of the crowd. The Costa Ricans put their poor form behind them and played with purpose, their shots denied constantly by their woodwork.
And then in the 31st minute it happened: Blerim Dzemaili buried a volley and put the Swiss up 1-0. It wasn’t just the celebration, the blaring music or witnessing 45,000 fans get up simultaneously, irrespective of whichever team they were rooting for. It was all of that. That is a FIFA World cup goal. The game ended up a 2-2 draw; a volley, header, tidy finish and perhaps the most flukish penalty were the main action points of a cracking game.
I still remember the last sights of the stadium…light flooding onto the lush, green pitch; the players acknowledging the support of their raucous fans. It’s a sensation that words cannot capture. Disappointment, ecstasy, passion, zest, gratitude and contentment. Emotions take total control of you. It’s phenomenal.

Since we’d booked tickets for two games and seen them both, we thought all that was left for us to do was sightseeing. Rumour had it though, that whenever favourites were knocked out their large fan contingent found it better to resign their ticket rather than watch another team play. It may sound bizarre, but I see that as a loyal gesture. And so, if were lucky, you could end up getting last minute tickets for matches. And that’s how we ended up getting tickets to the semi-final, no less! It involved a mad run out of a restaurant to a ticketing centre — it was quite intense really — but 20 minutes later, we were in possession of four gleaming tickets in Dad’s hand.
St Petersburg stadium is magnificent. The berets, the “Allez Les Blues” chanting, the baguettes – they were all back! Just like Luzhniki, the French were here in numbers. But they opposed a confident, youthful Belgian side backed by vehement support. The gold trophy stood only two triumphs away. And we were all set for 90 minutes of wonder.
And wonder is what we got. De Bruyne, Pogba, Mbappe, Hazard, Griezmann, Lukaku —  players we idolise in Australia — were a mere 50 metres away. And the stars didn’t fail to disappoint; with Hazard and Mbappe being the standouts from their respective sides. In the end, it was an Umtiti header that not only took France to the final but, in essence, to the World Cup Trophy. Allez Les Bleus! What a finish!
Our holiday featured 270 minutes of game time. But it also featured some things that will never be erased from our memories! Nothing will recreate the electric atmosphere we experienced. The Mexican Waves, the chants, the taunts, the flags (Indian flags too!), the music, the celebrities (Ambanis, Bachchans), but most importantly, the players and their fans.
Spasiba, Russia and Das Vedanya!
- Advertisement -
Share
WhatsApp
Facebook
Twitter
Linkedin
Previous articleAuntyji: When life gives you nimboos…
Next articleThe politics of curry