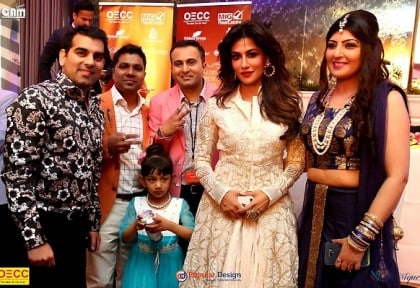 She is 40 and fabulous; a woman with great poise, charm, talent and dollops of oomph. No wonder Melbournians went rather dotty taking selfies and photos with the stunning Chitrangada Singh during her recent visit to Melbourne.
The Indian film actress was in town to judge a fashion Designer Competition held at Emerald Receptions in Thomastown.

Looking resplendent in her Rahul Mishra designed white gown, with subtly highlighted cheekbones and a sensuous smile, she graced many a Facebook timeline and added more admirers to her fan base.
With multiple brand endorsements and movies like Inkaar, Yeh Saali Zindagi, Hazaaron Khwaishein Aisi and Desi Boyz to her credit, Chitrangada has carved her own niche in Bollywood. She appears in commercials for Garnier, Puma, Parachute, Airtel, and Tanishq and many others. A fitness freak and fashionista she has impressed on the ramps for many reputed brands and designers in India.

Drawing from her knowledge of the fashion industry and her extensive modeling career, Chitrangada was entrusted to pick a winner from five designers that participated in the competition. Yogita Bhardwaj from Yabs Group and Sri Lankan celebrity Malith Perera accompanied her on the judging panel.
“The aim for this competition was to give up and coming designers a platform to demonstrate their design skills and flair in a friendly competition. The entrants came from diverse fashion backgrounds and displayed a great variety of garments on the catwalk,” said Mihir Shah, Managing Director of Popular Designs, who organised the event with Nitin Gursahani.

Eclectic it was with some flashes of innovation and creativity amongst the styles on display. The palette of colours swung from dusty rose to shocking pink as urban staples appeared alongside dressy gowns and vibrant lehengas. The overall fashion segment drew mixed reviews, however, the consensus was that they were wearable if not va-va-voom.
The models were a mixed group of amateurs and professionals in all sizes, from waiflike to voluptuous. The layout of the venue, sans a custom-built runway ramp, proved tricky for precarious high heels but they managed to walk through with confidence.

Out of all the models, Jaspreet Kaur stood out with her attitude, sporting a turban and wielding a stick. She walked like she ruled the fashion world when in fact it was her debut appearance on a fashion runway.
Jaspreet wore a creation of Bend d Trend label by Rupinder Kaur Gurm Batra who won the competition. RMIT Fashion student Hina Amit was the runner up, followed by Nina Hans in third place.


Jennifer Paul made an impact with her white collection and runway style, as did Sukhjit Kaur with her collection from Trendz fashion house.
Vishal Modi, the lone male model in the competition, proudly displayed an outfit for Indian label Komal.

According to Sonia Singh, who helped organise the show, judging was not limited to the garments, other factors like aesthetics, presentation, and practicality were also considered.
Once the winners were announced and the emotions settled, Chitrangada went on to graciously pose for endless photographs with the audience and sponsors.
- Advertisement -
Share
WhatsApp
Facebook
Twitter
Linkedin
Previous articleCelebrating the culinary diversity of India
Next articleThe ride of my life