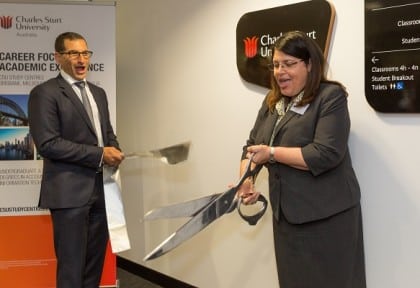 Who would have thought that one of the most famous Australian explorers was actually born in India? The story of Charles Napier Sturt started with his birth in Bengal in British India on 28 April, 1795. He was sent to England for his education and later served in the British Army. Seconded to Australia, escorting convicts aboard the ship Mariner, he arrived in Sydney on 23 May, 1827.

With the approval of Governor Darling of New South Wales, Sturt set out to explore the Australian continent and faced adversity and near death but managed to map the course of the Murray River and later went on to write authoritative treatises on his exploratory journeys.
In 1989 a University was named after him to honour his achievements and ever since, Charles Sturt University (CSU) has maintained a solid reputation in regional NSW.
Committed to achieving excellence in education and maintaining national leadership in professional education, in the past 15 years, CSU has expanded its scope to reach out to the metropolitan areas of Australia. Having already partnered with higher education provider Study Group to set up outreach campuses in Sydney (2006) and Melbourne (2007), to provide study programs for international students, they have now brought a long-awaited campus to Brisbane.

The CSU Study Centre offers postgraduate Masters programs in Information Technology and Professional Accounting, and features state of art computer teaching laboratories, a well-equipped library and student centric infrastructure such as student lounges with microwaves and vending machines. The academic teaching staff is highly qualified and from a broad industry cross section. The Brisbane campus will also have a qualified student counsellor who will provide student support and academic counselling.
On 23 August, Minister for Multicultural Affairs Grace Grace visited the CSU Study Group campus, located on Charlotte Street in the Brisbane CBD, to officially open the first semester of study. Preceding the ceremonial ribbon cutting, Minister Grace addressed the gathering by welcoming the addition of CSU Study Centre to the list of tertiary educational providers in Brisbane. She emphasised the multicultural nature of Brisbane City and termed it an ideal environment for international students to pursue their dreams of higher education. “Even though we have arrived on different ships, we are all in the same boat now,” she remarked.

At the launch event, Managing Director of Study Group Warren Jacobson informed the audience that the first intake of international students has now commenced and the students are enjoying their semester.
In an exclusive interview with Indian Link, Jacobson discussed the multiple programs in place to make the international students feel welcome, including the acculturation process, exposing the students to their new environment and allowing them to forge bonds with the local community. Other programs in place including mentoring, peer assisted study programs and embedded internship programs. Extra-curricular activities such as sporting events and celebration of cultural events such as Diwali also seem to be high on the priority list.
“The largest cohort of the students is from India. It is not surprising as we have a long term commitment to growing the brand in India and we have good systems in place that give adequate information to prospective students there,” Jacobson said. “We also have a reliable process of vetting the educational agents so that the information that is imparted is reliable and authentic.”

Jacobson emphasised that CSU has an enviable track record of producing graduates who achieve success in their chosen industries with a current graduate employment rate that is 12% above the national average. The CSU Study Centre aims to enrol 2000 new students this year taking the total number of international students enrolled in Sydney, Melbourne and Brisbane to approximately 4000 students.
With an increasing number of Indian students preferring to study overseas, it would be a safe bet to assume that many of those students will be heading to Australian shores, just like the pioneer explorer Charles Sturt, to discover what Australia has to offer.