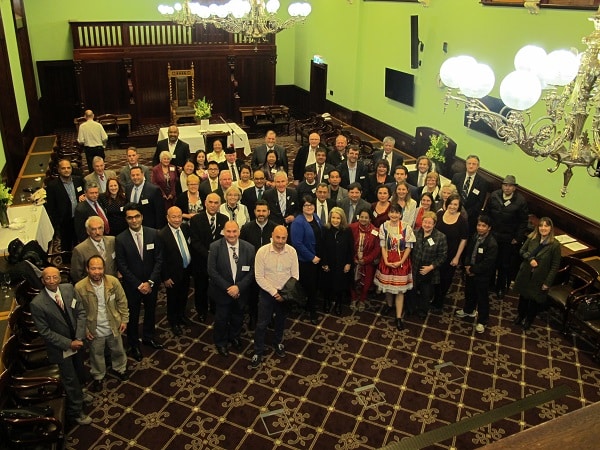 It may be a truism but it is universally recognised that the media plays a major role in forming public opinion and in the under-pinning of democracy. With some 28% of Australians born overseas and one-half having parents who are born overseas, politicians are acutely aware of the need to be able to get their message across to community members whose first language may not be English. So it was refreshing to have the Premier of South Australia Jay Weatherill inviting members of the ethnic media to a reception to celebrate their contribution.
On a stormy winter’s evening over 60 members of the media braved the conditions to attend the reception held in Centre Hall at Parliament House in Adelaide. With almost as many languages represented as attendees, it was interesting to note that barely a quarter were from the print media with almost all the rest coming from radio broadcasting. Coming inside from the cold and with refreshments to hand it did not take long for those attending to start sharing experiences and getting to know each other.
For migrants and those not confident in the English language, radio broadcasts and newspapers in their mother-tongue form an essential part of their lives. Such media is able to relay not just Australian news and current affairs to their communities but also help maintain contact with their roots and places of origin. Music from home, recipes of traditional foods, interviews and individual achievements of community members, all form part of the link to their first home and culture.


Talking to representatives of Persian community TV it soon became clear how keen they were to set up a digital radio station and appeared quite interested in the 24/7 digital broadcasting by Indian Link. The Vietnamese community has a strong presence in Adelaide with the Governor of South Australia being a former refugee from Vietnam. The strength of this community was well represented by members of their media.
Vinaya Rai, representing Indian radio Akashvani Adelaide, was part of the large group of 5EBi, the Multicultural Radio for Adelaide and South Australia, an organisation funded by the State Government. Much to her credit Vinaya Rai is currently also Secretary to the EBI Executive. Staffed by volunteers, Akashvani Adelaide produces and presents content on a weekly basis and manages to juggle successfully the diverse language requirements of the Indian community.
In her speech, Zoe Bettinson MP, Minister for Multicultural Affairs, said of the assembled media, “Your sector carries a strong and influential voice and there is much to be gained from engaging directly with multicultural groups through your channels whether that be through print publication or radio programmes. You are central to informing citizens, alleviating social isolation and enhancing our shared experience of multiculturalism”. And she continued with these telling remarks, “The glue that holds us together is mutual respect, a deep recognition that each of us is entitled to the same dignity and the same opportunities”.

Speakers also pointed to the contribution that migrants from ethnic communities make to the success of the state. Their willingness to work hard and take risks in setting up businesses was recognised. Their contribution in a variety of fields was acknowledged. For example, Indians have a strong representation in the fields of medicine, science and research, and also form the largest ethnic group driving taxis in Adelaide.
There’s no doubt that ethnic media plays an important role in the community. To be recognised with a reception in Parliament House, the house of the people, was a fitting tribute to their contribution.
- Advertisement -
Share
WhatsApp
Facebook
Twitter
Linkedin
Previous articleA cultural feast for Lord Ganesh in Adelaide
Next articleA carnival with a cause in Perth