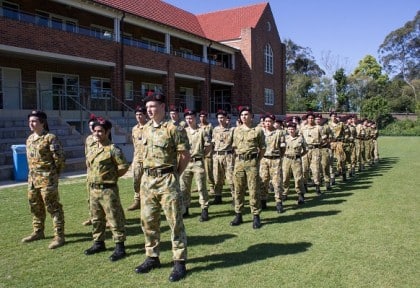 Amidst talk of what it means to hold ‘Australian values’, community youth demonstrate how they embody integrity, courage, mateship and a love of the outdoors that will stay with them for life

On 25 April this year, 17-year-old Danuka Tennakoon participated in one of his favourite annual activities. Dressed in his kilt Macpherson and balmoral, he played the bagpipes in a marching band as part of Sydney’s Anzac Day Parade.


“We led a group of retirees down George Street in two marches, and afterwards, participated in a mass band,” he told Indian Link.
They played a mix of songs, including Danuka’s favourites Waltzing Matilda and the Scottish heritage Flower of Scotland and Skye Boat Song.
As a Year 12 student at Knox Grammar School, this is the sixth year in a row Danuka has participated in the iconic march. The school’s pipe band performs at inter-school events, special cadet parades and pipe band competitions, but it is the Anzac Day event that holds a special place in Danuka’s heart.
“It is definitely the event all the boys in the band look forward to the most. Those first moments early in the morning, when we are all formed up and we hear the bugle, it feels as though this is what all our practice has culminated towards, and we have to put our best foot forward.”

The music of the pipe band instils a sense of history for the other students as well.
Danuka’s classmate, 18-year-old Manan Luthra, observed, “At the school’s own Anzac Day event, the cadets wear their ancestors’ military decorations and we pin sprigs of rosemary on to our lapels. And when the pipe band starts off the ceremony, we feel it – we get what the event is all about, even though we may have no personal connection to it.”
It is amazing to see how New Australian youngsters take to it all, and participate in it and experience it with a sense that it is their own culture – even though it is different to the one they see at home.

It is amazing, in the light of recent debates about New Australians demonstrating a commitment to “Australian values”.
As cadet leaders, do Danuka and Manan feel ‘more Australian’ when they wear their Auscam fatigues on a weekly basis and the kilts on ceremonial occasions? They don’t understand the question: it’s as if they don’t feel any more or less Australian than they do in their regular clothes, or when they are not being cadets.

Donning the kilt does imbue a deep sense of heritage, revealed Danuka, even though, admittedly, it can be a tad uncomfortable at times. But it’s true, Manan chimed in, the chicks dig them! (Now if that’s not an Australian attitude…)

Both boys have been part of the Australian Army Cadets since they were 13, a youth organisation modelled on the Australian Army. It is a personal development program that aims to inculcate the Army values of courage, initiative, respect and teamwork. Adventure activities are undertaken in military style settings of physical and mental endurance, and students learn orienteering, signals, navigation, first aid, field craft, bush craft, watermanship, survival skills, equipment maintenance, ceremonial marching and drills. Team building and comradeship, self-confidence, personal discipline and self-sufficiency are also developed. Particular emphasis is given to leadership skills, management and risk assessment, and students participate in promotions to gain ranks.
There are classes in defence history, aerodynamics, even lessons in the proper use of firearms.

A memorable experience for both Danuka and Manan has been the hike up Calf Pen Track in the Singleton Military area, conducted recently. A 13-kilometre trek, it covered rocky, muddy and heavily sloping terrain, along a cliff line with elevation of 150-170 metres. They carried with them their raincoats, jackets and rations which they had prepared themselves in 24-hour meal packs.
“We navigated our own way, with no radios,” Manan recalled. “It was physically gruelling – I pretty much hobbled the last couple of kilometres. Once we got to the top of the mountain, it was bitterly cold, and none of us wanted to move! We only had hootchies (a tarpaulin-like shelter) to sleep in.”


Also memorable was receiving rank after a promotions course.
“As a young recruit in Year 8, I would look up to my Cadet Under Officer,” reminisced Manan. “Wanting to be one myself, I worked my way up the ranks through Corporal and Sergeant, and am now Cadet Under Officer. As a 17-18 year old, I have direct responsibility for 130 recruits this year (including leading them up that day-long trek at Singleton), ensuring that they learn the basic skills of field craft, first aid, navigation and drill movements, and that they enjoy themselves. I lead them in parades and in weekly training sessions. It has given me a unique leadership experience that few people my age would have had.”

Danuka agreed, “Getting rank was a special event. The leadership in Cadets puts us in very stressful decision-making situations where many others, who we are responsible for, are involved. It is a leadership style very different from what is offered in school, dealing with a broad range of kids from Years 9 to 12. I know now it is an incredible learning opportunity that will transfer to other aspects of our lives later on.”

And of course it is not for boys alone. Meghana Reddy, a Year 10 student at Ravenswood School, has been a keen cadet for nearly two years now.
“I was attracted to Cadets because of the prospect of making new friends outside of school,” she revealed. “And because my parents thought it might be good for discipline! But I found I enjoyed the range of different activities that we were exposed to. I loved the outdoor education, particularly bush survival, and I’ve learned so many life skills. Physically, yes it has been challenging – I’ve never pushed my body as hard as I have at Cadets! But it’s a very supportive environment so it’s been rewarding in the end.”

In coming years Meghana looks forward to the leadership opportunities that will come her way.
“I’m not sure if I will take up the Army as a career, but I’ve made up my mind I want to do an internship with the defence forces before uni, and maybe join the Army reserves.”
Do they gain a sense of service to the nation?
“Yes we do,” said Manan. “In some small way, we are putting ourselves in situations that diggers have been in. To some extent we can empathise with what our own servicemen are going through. Staff members are army personnel or ex-army; they tell us stories that we can relate to.”
“Commemorating Old Boys who have served, or who continue to serve, is another way we relate,” Danuka added.
It was Meghna that had the last word. “At Drills or on Outdoor camp, our different ethnicities all dissolve into one. Everyone’s Australian.”
- Advertisement -
Share
WhatsApp
Facebook
Twitter
Linkedin
Previous articleLest we forget
Next articleVibrant Vietnam