For eminent service to medical governance, administration, and technology, and to medicine, through leadership roles with a range of organisations, to education and the not-for-profit sector, and to the community of western Melbourne. 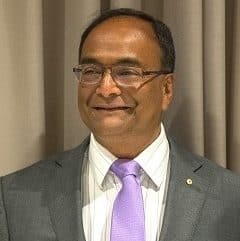 Reading Time: 4 minutesFor Dr Mukesh Haikerwal, every day is a sense of celebration of what it means to be Australian. Therefore, to get the highest civilian honour on Australia Day is ‘truly life changing’ and ‘extremely humbling.’
The accomplished GP has been appointed as a Companion in the General Division of the Order of Australia (AC) for eminent service to medical governance, administration, and technology, and to medicine, through leadership roles with a range of organisations, to education and the not-for-profit sector, and to the community of western Melbourne.


“For me, to be in a position in my life and career to receive such an honour has only been made possible due to the unflinching support and unremitting encouragement of my closest circle, the people who have been with me through every step of endeavour, adversity, achievement, and success” said Haikerwal.
The eminent doctor, who runs a practise in Altona North, has received a string of accolades during his career for his contributions to the medical profession.
His leadership roles include being the youngest Federal President of the Australian Medical Association (2005-2007) and Chairman of Council for the World Medical Association (2011-2015).
Haikerwal was awarded the Order of Australia in 2011 for distinguished service to medical administration, to the promotion of public health through leadership roles with professional organisations, to the reform of the Australian health system through the optimisation of information technology, and as a general practitioner.
Haikerwal is particularly proud of the work he did with the specially-convened National Health and Hospitals Reform Commission as part of a team, and with the Australian Institute of Health and Welfare.
“Allowing me the opportunity to make a difference has been due to the great organisations and people within them, that on the whole were kind to me and listened and learnt,” said Haikerwal.
“These are organisations that dedicate themselves selflessly to bettering the lives of others. They are the collaborators and partners right across the nation and across the globe that have joined to help us all ‘do the right thing’ – to be brave and bold, and lead for the people,” he emphasised.
With increased focus on charity, he is currently on the board as director of Beyond Blue, providing guidance and contributing to its efforts to improve the mental health of health professionals.
He is working with Cancer Victoria with its aim to improve advocacy and knowledge of cancer, cancer care and facilities. He is also involved with Brain Injury Australia in response to his own recovery from a brutal attack in 2008.
In September 2008, Haikerwal survived a vicious gang attack and robbery near Dennis Reserve in Williamstown. The attackers inflicted serious injury with a baseball bat that left Haikerwal brain damaged and within inches of losing his life. He had to be put in a medically induced coma to survive and had to relearn how to walk and talk again.
Lucknow-born Haikerwal is the eldest son of Dr Madhuri and Ishwar, both Indian-British citizens, who migrated to Australia in 1981. Haikerwal started his education in a London Boarding school at the age of 6 and went on to study Medicine in Leicester.
In 1990, he moved to Australia with his wife Dr Karyn Alexander and set up practice in Altona North. He has three sons Suresh, Ajaya and Jeevan.
“First and foremost, I am a GP – a local family doctor who serves his local community. This defines me,” said Haikerwal.
“It is a privilege to have as a basis, my foundation, the hard-working people, the salt of the earth, the everyday folk who have come from every corner of the globe to live and work in our proudly diverse and multicultural region. They give so much to this great country,” he continued.
“Our daily continuing challenge is to provide high-quality, patient-centred, holistic care in a region with pitifully low levels of investment. That daily challenge – those daily encounters with real people, real patients – has provided me with the burning arrows of desire: to improve the lot of the common man,” said the soft spoken GP
Whether he is confronting racism by condemning abuse of international medical graduates or promoting technology and eHealth initiatives to deliver better patient care or debating voluntary euthanasia, Haikerwal is leading the charge.
According to him, expending energy on multiple commitments is possible by ensuring a healthy body and a healthy mind.
“I am careful with my intake of salt, sugar and saturated fats. I eat sensibly, exercise, visit my GP regularly and look after my mental and physical health,” he said referring to the physicians pledge as part of the WMA Declaration in Geneva.
He wishes to dedicate the Australia Day Honour to all his colleagues.
“I would have achieved little without my chariots of fire – my professional colleagues from within medicine, and from disciplines aligned to health, healthcare, welfare, and service planning and delivery,” said Haikerwal.
“In particular, I salute those who have lost their lives in their pursuits, for whom I will continue to strive, as they would have, to improve the health of the nation and the happiness of those who pursue it,” he said.
- Advertisement -
Share
WhatsApp
Facebook
Twitter
Linkedin
Previous articleDr Vanita Rajul Parekh, AM: Of healing and hope
Next articleAnant Kaur Sandhu, AM: Paying it forward with food