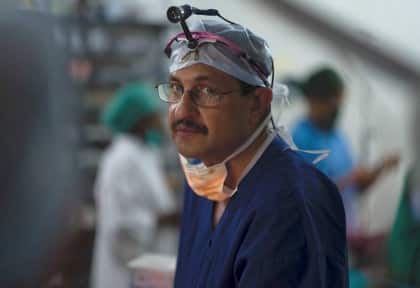 A renowned plastic surgeon based on the Gold Coast in Queensland, Dr Dilip Gahankari’s skills go beyond performing nips and tucks to enhance the cosmetic appeal of Australians. With an innovative mind, Dr Gahankari has extended his work to helping the disadvantaged residents of a tribal area in India.
Growing up in the small town of Ballarpur near Nagpur, like many Indian families, Dr Gahankari’s family placed great value on learning.
“My family has seen some real tough times, but my parents always laid great emphasis on our education,” Dr Gahankari says. “In those days electricity was so scarce, my sister and I used to study under kerosene lamps or at times under street lights. I have always aspired to be an engineer, but my father was quite keen I become a doctor.”
An education loan from the bank for a government medical college, stamped Dilip’s entry into the field of medicine. It was during the course of his medical education in the late 1980s he met his three soul mates, Prem, Avinash and Ravi.
The four friends were keen on giving something back to the community.

“We decided we could offer our knowledge and services to people in remote areas of India,” says Dr Gahankari. “We did try in our initial years, but realised there were quite a few hurdles reaching these remote areas.”
Remaining firm friends, each of them moved on to further pursue their careers in medicine, across India and globally.
An opportunity arose about a decade ago, when one of the four learned about a remote village in Melghat near Amravati, ridden with thick forest, on the borders of Maharashtra and Madhya Pradesh separated by the Tapi River.
“Ravi, one of our quartet, identified this village because of its remoteness,” Dr Gahankari explains. “Later, a physician, Dr Ashish Satav, with a similar altruistic attitude, started a charity hospital. My friends and I were certain about helping these residents.”
For the past ten years, Dr Gahankari has been running a plastic surgery charity camp for the predominantly tribal population of this area.

“A lot of the tribals have cleft lips, palettes, breast, lip or head tumours, and severe deformities from burns,” Dr Gahankari says. “Forest fires or accidental burn injuries from cooking on their chula (stove) are quite common.”
“I visit annually, and now, for the past few years, our team has included a Brisbane based hand surgeon, nurses and an occupational therapist.”
Each trip to Melghat lasts around five days, and generally it takes about half a day to get to Melghat from Nagpur.
“On my first day on the camp, I have around 120 people who line up,” Dr Gahankari shares. “Over the next few days surgeries are planned; this year we conducted close to 108 surgeries.”
“Yes, there are sleepless nights, but this work is gratifying and fills me with joy when they see the results.”

He says that Melghat is a beautiful village, “Waking up to the chirping of birds, taking a walk by the river, chatting up and catching up with friends late into the night post surgeries…”
Dr Dilip Gahankari will continue his work with the tribals of Melghat. Beaming with pride, he says, “When the other fields of medicine started boring me in my earlier education years, I realised plastic surgery is a fascinating surgical branch, it is innovative and engineering oriented. I have no regrets.”