Diwali at Federation Square: Celebrate India does it again 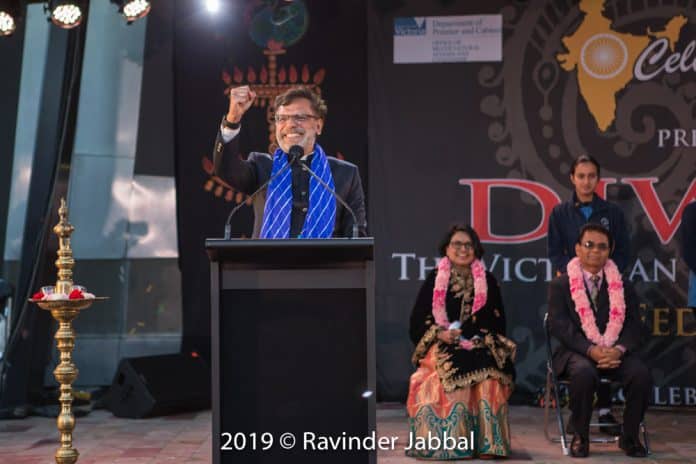 With the state of Victoria recording the largest number of residents born in India, the celebration of its largest festival warrants an equally massive effort at Federation square. As they say in India, “Party to banti hai.” This year again, Celebrate India Inc. did not let the small matter of distance from their country nor Melbourne’s moody weather affect their Diwali celebrations in any way. The 2019 Diwali at Federation Square was observed with great fervour, fun, festivities and fireworks, making it a big fat Diwali party.

The colourful sights, sound and tastes of India transformed Melbourne’s Federation Square, attracting a large crowd from all parts of the state. The event offered a shared feeling of cultural identity bringing people together to spectate and participate in this important Indian festival.

Thanks to months of planning and organising by a team of dedicated volunteers from Celebrate India Inc, Melbournians could enjoy and experience an eclectic mix of traditional and contemporary cultural feast of all things Indian.

The ‘Indian Christmas’, as it is colloquially known, was crammed with fun-filled activities over 14-19 October. Iconic buildings around the city were all decked up in colourful lights as part of the illumination project initiated by Celebrate India.

Besides the joy of seeing the beautifully lit up city landmarks, the significance of lights symbolising knowledge and wisdom over darkness and negative forces is an important message to share in today’s world, according to founder member Jaya Sharma.

As a new initiative this year, unadorned concrete blocks around Federation Square were converted with colourful Indian folk art engaging hundreds of passers-by who stopped to converse and appreciate the vibrant visuals.

This year’s key highlight included a spectacular performance by renowned Kathak dance troupe Abhyas Repertory. It was classical Indian dance at its best presented in its most graceful, awe-inspiring form by a talented dance troupe from India. The beautiful dancers, specially invited to perform for this Festival courtesy of the Government of India, easily stole the show.

The 10-day long exhibition called ‘Colour and Costumes of Diwali’, displayed at the Fracture Gallery, was another drawcard this year. Fun activities by AFL, photos with the T20 World Cup Cricket Trophy, Indian Link’s photo booth, Optus Telecommunication’s phone deals, Indya Food’s milk drinks and Gaura Travel’s spinning wheel were among the goodies that kept people interested. As part of this annual event Celebrate India also collaborated with the Greek community and supported the Beyond Blue charity.

Celebrate India Inc. Chairperson Arun Sharma made a special mention of the bipartisan support that the Festival has received over the years from both major parties as well as thanked Premier Daniel Andrews for his ongoing encouragement over the last 8 years.

“We cannot appreciate anybody more than Premier Daniel Andrews for not just offering financial and other support but for always endorsing our mission of reaching the wider community,” he declared during the formal part of the evening.

“No community works harder, no community is more focussed on family, on giving back to those who are less fortunate, working to expand our economic opportunities, working in law, engineering, construction, sciences, arts and every part of the society, than the Indian community,” he said.

“We are a better, fairer, stronger state because of the contributions that the Indian community makes today and every day,” he continued to big applause.

He thanked the volunteers to help realise the dream of making this one of the biggest celebrations of Diwali outside India.

Diwali at Federation Square has evolved over the years to become a festival of range and diversity since its inception in 2006. The overall attendance may have suffered this year, due to the wet weather but it did nothing to dampen the spirit of the festival that was embraced with equal enthusiasm by those who braved the weather to participate in the gaiety. Amidst the blaze of fireworks and haze of bonhomie, Victorians continued to celebrate the triumph of veracity over evil.