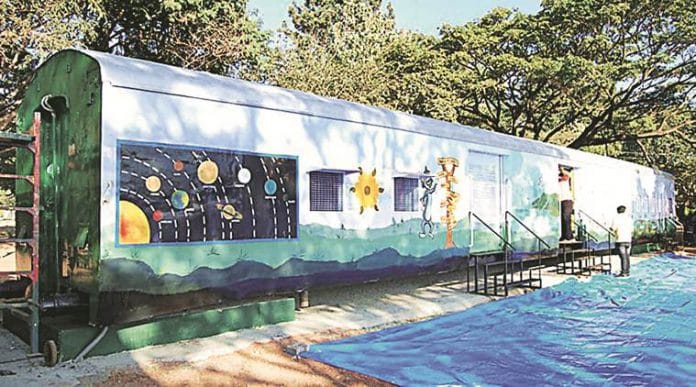 You may have come across fine-dining on trains, hospitals or even exhibitions on trains. But have you ever come across a school holding classes in a train compartment? Well, the Government Primary School in Ashokapuram Railway Colony, Mysuru, within the Central Workshop here has put creativity to good use to transform two disused coaches into classrooms, christened ‘Nali Kali’ in Kannada, which translates to ‘joyful learning’ in English.

“With the condition of staff quarters deteriorating over the years, two abandoned train coaches have since been refurbished and transformed into classrooms,” she said.

The refurbishment like wall panels, fans and lights — otherwise used in regular coaches — was undertaken voluntarily by the Mysuru Central Workshop staff with a minimal expenditure of Rs 50,000 from the workshop account.

While one bogie serves as a classroom for children enrolled in two classes, the other serves as common place for lunch or other classroom activities.

“Both coaches have been re-painted in eye-catching colours, with alphabets and numerals painted on their exterior to inject an element of ‘joy in learning’ among the young minds,” Vijaya said.

Bio-toilets have been installed outside the two coaches for students.

The school has 60 students in classes 1 to 7 on its rolls, mostly from families below the poverty line, apart from four teachers.

“We expect the number of students to rise after the addition of two new classrooms,” she said.

“Next, we plan to reuse metal scrap from disused coaches to construct a roof over the entire premises,” Vijaya added.

Authorities in Madhya Pradesh’s Dindori district had last year remodelled a government school to look like a train, in order to attract more students.

According to railway officials, since the district has tribal-dominated areas and no rail connectivity due to lack of development, a train is a sureshot attraction among children.

Santosh Uikey, headmistress of a secondary school in Khajri, thus ensured the transformation of the school building into a train-like structure, painted in shades of blue and yellow and classroom doors and windows resembling those of train compartments.

The school building’s front portion was built to look like a train engine.

Interestingly, school teachers pooled their own money to build the unique building.