Discovering the healing power of yoga 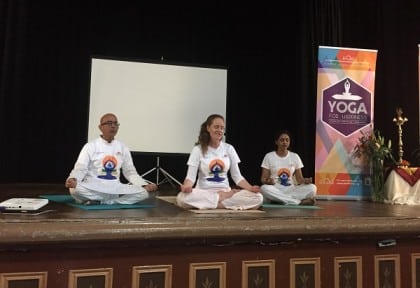 Enthusiasts come together to celebrate International Day of Yoga in Fitzroy

The Consulate General of India celebrated the International Day of Yoga by organising an event in collaboration with Art of Living on 25 June in Fitzroy. Around 150 people turned up for the event which celebrated the spiritual discipline in all its glory.

The event began with the Consul General of India in Melbourne, Manika Jain, addressing the event, followed by Laura Anderson, Chairman of Melbourne Fashion Festival, and Shyamala Benakovic, CEO, Yoga Australia, talking about their tryst and journey with yoga practices.
The week long celebration of International Day of Yoga, which is celebrated on 21 June across the world, marked its third anniversary this year.

The morning chill and rain didn’t deter yoga enthusiasts who turned up at the event with mats, blankets and the zeal to heal their mind and body.
“I have been doing yoga for a year now and I can’t wait to do the asanas,” said Maria Anthes, a Greek from Melbourne who set up her mat and immediately got into a Sukhasana pose (sitting with your legs crossed).

After the formal address, three yoga gurus (teachers) took the stage and began with guiding the audience in movements to relax the body.
Jumping up and down, swinging the head from side to side, letting loose while making bee-like buzzing sounds: the child-like atmosphere set the tone for the asanas ahead.
Everyone joined in to practise the Surya Namaskar followed by ustrasana (camel posture), bhadrasana (sitting butterfly posture), sasakasana (the hare posture), vakrasana (spinal twist posture), setubandhasana (the bridge posture) and many more.

Next, all were asked to switch to nindra avastha or sleeping position. Interestingly, a lot of people drifted into sleep for a while, achieving instant relaxation.
After a 15-minute nap, the participants were asked to sit up and perform deep breathing. Chris, a respected yoga teacher, guided the participants to perform kapalbhati and brahmari (breathing exercises) to end the yoga session.

Yummy and healthy treats like lentil soup, coconut balls and turmeric milk waited for all enthusiasts to feast on. After the event, one of the participants, Aarti, remarked, “I feel so rejuvenated. I keep telling myself I need to do more of this, but hardly get the time.”
We are sure most of us left with the same feeling.