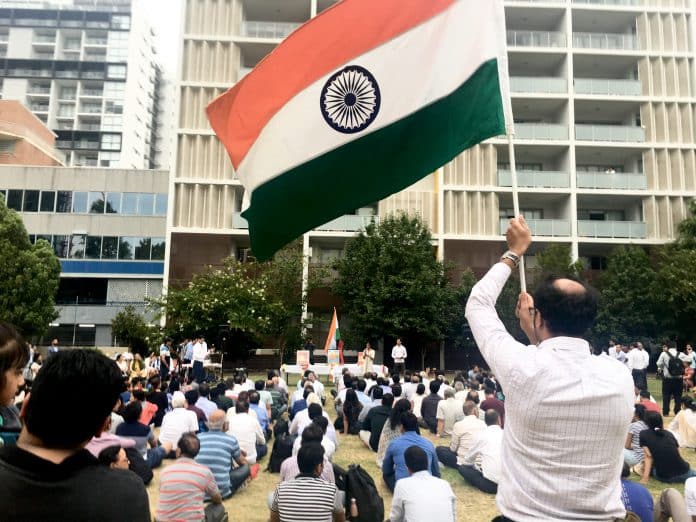 As Hong Kong becomes a city fighting for its rights from China, the squabble has spilled on to the streets and universities around Australia. In recent days, pro-Hong Kong protesters were taunted with expletive-laden chants from pro-China activists before scuffles broke out in Melbourne and Adelaide. Violence has erupted at some of these rallies, with videos emerging of the two groups clashing with each other and punches thrown. While there are allegations that the pro-China students are being directed by Chinese authorities, there are also comments that the mainland students are being ‘spontaneously patriotic’.
So, when does dissent against opposition to your country of origin become acceptable? What about the Indian diaspora in Australia: at what stage does one fight back against what one feels might not be in the best interests of India?
In today’s world of fast flowing information and globalization, news from ‘back home’ is received as soon as it breaks. Thirty years ago, when handwritten mail and landline phones ruled, there was a high level of disconnect with the politics in the mother country. Nationalism was always there, but it was patriotism delayed. Not so anymore. The daily news diet of most Indian Australians is made up just as much of what is happening in India as it is of local issues, if not more so. Whether this is good or bad, is a discussion for another time.

With this increased flow of information, the unconditional love for India is in inverse proportion to the amount of time one has lived here. And as the Indian diaspora is composed largely of new migrants, chances are that they will be ‘spontaneously patriotic’ in their actions.
This was clearly demonstrated by the very public rally in the streets of Sydney’s CBD against Pakistan when the Pulwama attacks took place. The rallies were loud and clear and brought sub-continental politics to our shores.
Perhaps there is another way to show unconditional love for country of origin. A page can be taken from the book of the Jewish diaspora who seldom, if ever, take to the streets for their cause, rather are able to convey their terms to the powers that be, in a manner which cannot be ignored.
Time for the Indian-Australian community to win their debate through their intellect rather than with their brawn. To go about this, acquaint the local media with your views. Be strategic about your arguments rather than plain emotional. Present the facts and the background in a clear and concise manner. The local community is well regarded for its education:bring this to the fore when arguing for your side of the story.

Neither at the State or Federal levels is there an active group to lobby for all things Indian in Australia. It is time for the formation of ‘Friends of India’ political forums at both State and Federal levels so that, well, well placed Friends can be made who can understand the Indian perspective on various issues.
The diaspora can be ‘spontaneously patriotic’ in a more effective way than at street marches or clashes at rallies.