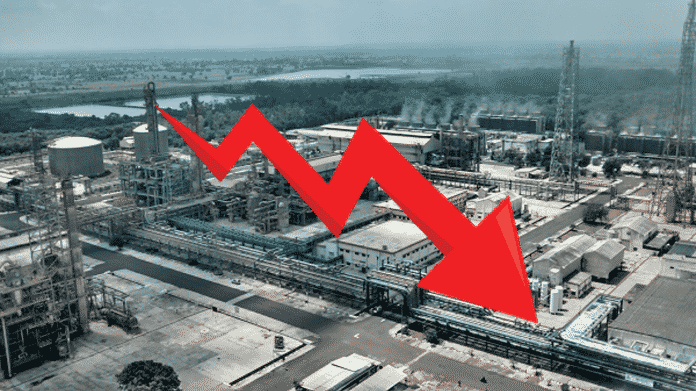 Contraction in manufacturing and mining activity and subdued demand dragged India’s September factory output deep into the red. The Index of Industrial Production (IIP) declined (-)4.3 per cent in September 2019 from (-)1.40 per cent in August 2019.

On a year-on-year basis, the growth rate of industrial output during the month under review was lower than the 4.6 per cent recorded during September 2018.

“The cumulative growth for the period April-September 2019 over the corresponding period of the previous year stands at 1.3 per cent,” it added.

As per the data, the output rate of the manufacturing sector contracted by (-)3.9 per cent in September from a YoY rise of 4.8 per cent. Similarly, other notable sectors such as mining and electricity saw a decline in production.

According to the data, mining activity declined by 8.5 per cent from a flat growth of 0.1 per cent and the sub-index of electricity generation was lower by (-)2.6 per cent from 8.2 per cent.

According to ICRA’s Principal Economist Aditi Nayar, “The industrial performance in September stood out as the worst YoY performance in the current series. Moreover, the lead indicators point to continued weakness in October, which, coupled with an unfavourable base effect, may well result in a further deterioration in the just-concluded month.”

India Ratings & Research’s Chief Economist Devendra Kumar Pant said, “This is the first time after November 2012 that all three broad-based sectors have contracted and it is the lowest monthly growth in the 2011-12 base year. In the old base year (2004-05), IIP in October 2011 contracted by 5 per cent. On a quarterly basis, Q2 FY20 IIP contracted by 0.4 per cent, the lowest quarterly in 2011-12 base… IIP has been very volatile and the small momentum of couple of months fizzles out soon. The Indian economy is presently facing a structural growth slowdown originating from declining household savings rate and low agricultural growth.”

Emkay Wealth Management’s Head of Currency Rahul Gupta said, “The persistent slowdown in industrial output growth may force the RBI to go for another round of policy rate cut. However, a possible rise of headline inflation above the medium-term target of RBI (4 per cent) may act as a point of caution before the RBI goes for a rate cut.”

Brickwork Ratings Chief Economic Advisor M. Govinda Rao said, “The decline in the IIP for the month of September does not come as a surprise. This calls for immediate intervention by the government. Specifically, the time is opportune for the government to increase public spending financed by actively pursued strategic disinvestment.”