#NSWElections2019: DANIEL MOOKHEY of the ALP, Candidate for Legislative Council

“The lesson I take from the Bhagavad Gita is about selfless action: this is what is expected of those with power (in politics and business)” 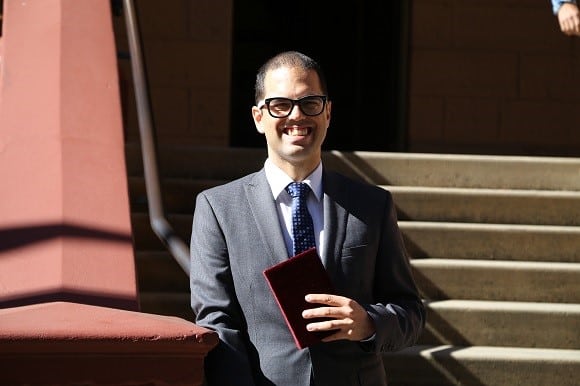 Reading Time: 3 minutesWhat convinced you to join the party of your choice?
I’m the son of Indian immigrants. I attended excellent public schools in Sydney’s Western Suburbs. Whenever I was sick, I could see a doctor for free. I could visit a world class public hospital if I needed to. When I realised that my good fortune wasn’t accidental, that people struggled for generations to build what some take for granted, I knew which Party was for me: Labor, the Party that dismantled White Australia, built Medicare and fights hard for public education.

We’re the Party for the strivers. We back small business. We fight for excellent public services like schools and hospitals. We abhor racism. We take seriously our responsibility to make sure the Parliament resembles the people it’s there to serve. We’re proud to have so many Indian-Australians running under the Labor banner, with excellent chances of winning election to the Lower House and Upper House.
We look forward to an election when the NSW Liberal Party can say the same.
What are the three main changes you wish to make if you are to be elected?
I’d like the people of NSW to learn in the world’s best schools. I never want anyone in NSW to worry about whether about whether they can pay for health care when they’re sick. I want them to have good full time jobs, which pay well, and are secure enough for them to support their families.
Tell us a bit about your background?
I’m a Punjabi puttar. My family hail from modern day Haryana. My parents were amongst the first Indians to benefit from the end of the White Australia policy – they came to Sydney in the very early 1970s, and helped establish the very first newspaper for Indian-Australians, as well as the first Mandir.
I was born in Blacktown and raised in Parramatta. I’ve earned a law degree, an economics degree, and a Masters in Defence Studies. After University, I proudly represented transport workers at a trade union. I then worked at a think tank, ran many political campaigns, and then I set up my own small business. For the past four years I’ve been a Member of the NSW Legislative Council.

I’m humbled that I had the honour of being the first member of the Indian-Australian community to serve as an elected Member of Parliament in NSW. I’m humbled to have taken my oath of office on the Gita – I’m proud to have been the first Australian to do so. The lesson I take from the Bhagavad Gita is about selfless action: this is what is expected of those with power (in politics and business). It’s an ideal we are all wise to remember.
Sitting unread on my iPad is the Kautilya’s Arthashastra – the Indian treatise on statecraft, translated from Ancient Sanskrit. It’s hard going. I haven’t given up.
What do you think are the pressing needs of the Indian Australian community?
My two sons are both under three; I’d like them to speak Hindi and Punjabi better than me. When I grew up, I learnt Hindi from listening to our parents, and watching Amitabh Bachchan movies (Coolie remains the best movie for any Labor politician to watch!). We’re past that stage – our community deserves better. I’m proud of Labor’s policy on community language education.
I’m watching the pioneers of our community, our senior-citizens, age. Our community deserves culturally appropriate aged care.
And like all parents from all communities, I’m worried about my children’s education. I don’t want them learning in demountable buildings, many which are over forty years old. I’m glad I see many other Indian-Australian children at my son’s early learning centre: when they all start school in a few years’ time, their schools will matter to me. They matter to everyone.

Who are you inspired by?
I’ve spent the past year immersed in the history of the US Civil Rights Movement. Hard to go past people like Rosa Parks, Martin Luther King Jr, Medger Evans and John Lewis. Everyone should read Dr King’s Letter From a Birmingham Jail. In my inaugural speech, I spoke about all of them – as well as the galvanising movement that inspired them all: the Indian Independence Movement.

There is a lot of disillusionment with politics and politicians in current times – what needs to be done to change that public perception?
Politics needs to be practiced by citizens again. Right now, it’s like a small club that makes all the decisions. This election we need to change that. If we don’t, people’s disillusionment will only get worse.