A 'spokes' woman for fitness

Priya Singh took to the bicycle as an exercise, but soon found herself hooked. 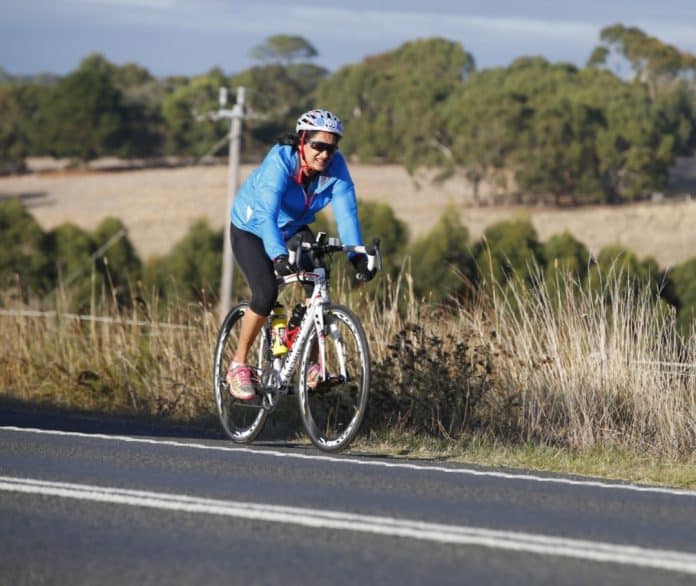 Reading Time: 3 minutesSelf-discipline is the magic power that makes Melbournian Priya Singh virtually unstoppable. Discipline and determination helped her all the way as she successfully completed the recently held 145-km RACV Great Ocean & Otway Classic Bike Ride.
Starting and finishing at Torquay, this is Australia’s premier and most spectacular ride, and has been running for over a decade. Almost 4,000 riders participated this year, among them our very own Priya.

“The 145-bike challenge was something I wanted to do for myself,” she told Indian Link. “There were many elevations on the way and the going was tough but I persevered. When I managed to finish without any issues, I was so happy I cried. It felt so good.”
Cycling for the body is like Sudoku for the brain: both offer great exercise and stimulation as well as slow the cognitive decline associated with age. For Priya, the benefits of getting into the saddle are many. She was recently diagnosed with osteoarthritis in the left knee, so running was out due to its adverse impact. She chose low impact cycling instead, as it was easier on her joints.
Priya, who has always maintained a healthy lifestyle, stepped up several notches in preparation. Weight training, personal training, spin classes, ungodly hour bike rides on Brighton beach and a strict protein-rich diet became the Holy Grail.

She started her recreational ride training with the 60-km Otway Classic, followed by the 100-km Around the Bay in October 2017 and finally the Otway Classic 2018. People have so many competing priorities that exercise gets pushed down the list but not so for the Singh family. For them, fitness takes precedence over everything else.
That combined with a love of the great Australian outdoors means bulk of their recreational activities involve stepping out together. “A week before my Otway ride we participated in the half distance triathlon challenge held at St. Kilda where my husband Anoop did the 1.9-km swim, I did the 90-km bike ride and Ayesha, our daughter did the 21-km run. It was a great team effort,” said Priya with characteristic enthusiasm.
Priya bristles with energy at any given time whether she’s sweating it out at the gym, holding personal training sessions for friends to motivate them to improve fitness, looking after her children or joining her other half for his Ironman challenges.
Hubby Anoop Singh has successfully completed several Ironman challenges with the most recent one done and dusted in Paris this April. Priya was there with him cheering him all the way to the finish line.
Anoop for his part also accompanied Priya pedal to pedal through her demanding Otway classic ride. “It’s a tough ride for a rookie and it would have been impossible to do it without his support,” she said gratefully.
Luckily for Priya there were no tire punctures. “I am no good with that kind of stuff. Riding, yes! Fixing? Oh no!” she laughed. The cyclist is gearing up to participate in more recreational bike events this year including Around the Bay in a Day event scheduled in October. Priya believes that everyone, especially Indian women ‘of a particular age’ should get moving before it’s too late. She is eager to promote bike riding among her peers.
“We live in the most beautiful city in the world. Make the most of it by getting active: walk, run, bike and experience the great outdoors. You will never regret it and your body and mind will be fitter, healthier and happier,” she said as she set out for another gruelling training session at the gym.