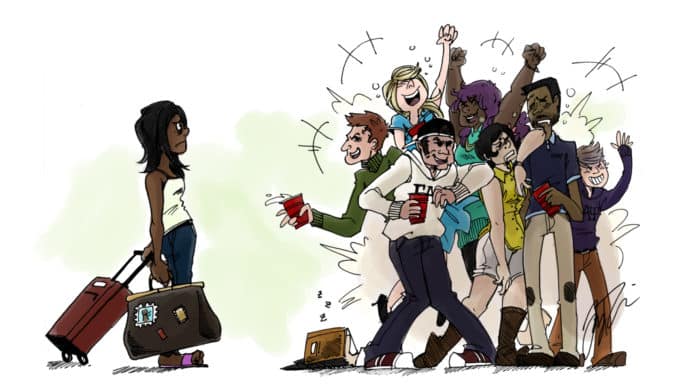 Halfway through watching my first film in an Australian movie theatre, I realised that I really needed to go to the washroom. When I asked my friend (who had already seen the film) if the intermission was coming soon, she laughed. Imagine my horror when I found out that the concept of an ‘intermission’ only exists in India!

One of my university professors loves to swear. If a projector stops working or her phone dies or something else goes wrong in her class, she’s the first person to drop the F-bomb. Does anyone else feel awkward when their professor cusses?

When does the bus stop…? My first time using a bus in Australia was nerve-wracking. I didn’t know that the bus didn’t wait at every stop and ended up travelling 10 minutes away from my destination – all because I hadn’t noticed that little red button!

One of the first few times that I visited a pub in Sydney, I ended up sitting at my table for nearly ten minutes looking for a waiter to take my order. I had no idea that, out here, you order your drinks at the bar.

Don’t know about you but I still struggle to call my professors by their name. They always smile then I refer to them as “sir” or “ma’am” and say gently that I don’t have to call them that… but it just feels weird calling them anything else.

This paneer has gone bad…? When my mother visited me in Sydney for the first time, she went grocery shopping alone while I was in class. She ended up buying a huge bar of feta cheese thinking it was paneer and didn’t realize until after she started making paneer parathas!

When I first moved into my apartment here, I spent an embarrassingly long time looking for the button for the geyser. I can’t even explain how much my roommates laughed when they found me exploring the house in a towel, wondering how to heat up the shower.