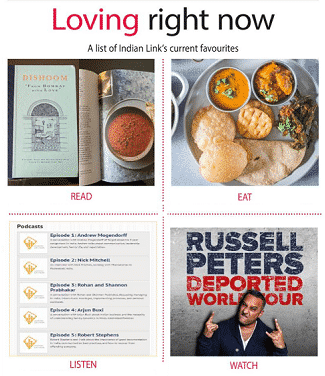 Life’s way too short to waste time on insane recipes that just end up in the trash… and missing vada pau from Bombay’s streets doesn’t make things any better. So, famed Irani Bombay restaurant Dishoom has saved us with the holy grail that is their recipe book. Part cookbook, part history and travel guide, this culture package is going to help you slay in the kitchen with recipes from Bombay made simple. You can now make your own Dishoom classics – Jackfruit Biryani, Prawn Moilee and yes, House Black Daal!

Nothing could have prepared Neil A. Miller for the completely foreign, chaotic world of Chennai when he moved there in 2010 for work. Today, the American expat hosts his podcast on his website Learning India, hoping to bring a new and insightful taste of the country to those trying to understand it the way he did. From interviewing other expats, to digging knee deep into the social webs and cultures of Indian businesses, join Neil in feeling more at home in the thriving world of India.

We all love “mind blasting” funny guy Russell Peters. Well, good news! Our favourite Indian-Canadian comedian and his staple ethnic humour are back in his new special Russell Peters: Deported on Prime Video. We’re all “gonna get a hurt real bad” laughing as he takes us on a humorous trip to his motherland, Mumbai, tackling more personal issues such as age and fatherhood. The show also gives an exclusive deep dive into the Russell we think we know, as he describes it as his ‘most personal and introspective set yet’.

Locally made, high prana, home style Indian vegetarian food! This is Tiffinly, a Melbourne based food service. It was co-founded by Hemil Deshmukh and Kapil Sheth, both high-flying corporates with wives in similar demanding jobs, and who had no time or energy to cook a fresh meal every night. When Kapil went through a spell of bad health, the penny dropped that fresh food is essential for good health. The fresh rotis here are a highlight, as are the undhiyu, panchratna sabzi, baigan ka barta, sev tameta and aloo tamatar jhol.