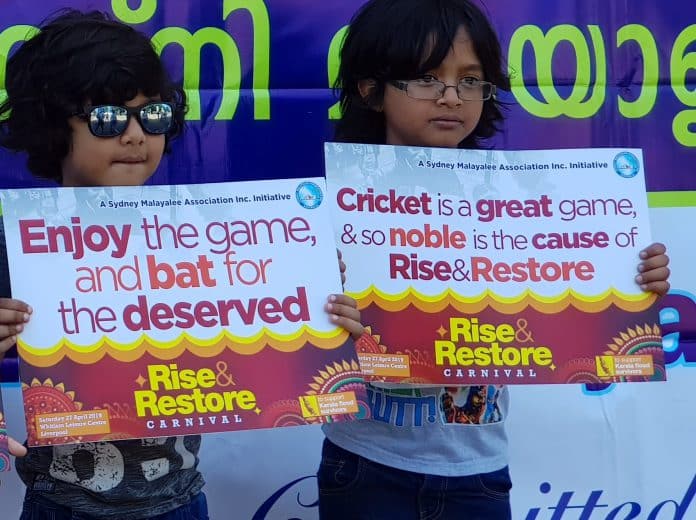 Reading Time: 3 minutesSome 450 members of the Sydney Malayalee Association rocked up together at the recent ODI between Australia and India at the Sydney Cricket Ground.
They were there not only to cheer their team on, but also for another very important reason – to support their cause of gathering funds for the Kerala floods survivors.
With the help of Cricket Australia (CA), they were there to draw attention to the Rise and Restore Carnival that is scheduled for Sat 27 April at the Whitlam Leisure Centre, Liverpool.
Outside the SCG, the Malayalees were in true celebratory spirit with drummers from Indo Oz Rhythms doing the rhythmic Chendamelam (drumbeats) and dancers grooving to peppy Malayalam number Jimikki Kammal. Spectators stood by fascinated.
The group conveyed the idea of the Carnival to the onlookers through banners, placards and stickers affixed on their colour co-ordinated white tops.
It is believed that this is the first time ever that Cricket Australia has supported a community organisation to raise awareness towards their fundraising efforts within and outside the stadium on the day of a match.
Louise Jeffs, the Group Business Development Manager of Cricket Australia said to Indian Link, “It was great to see the crowds following the performances of this group, and also interacting with them in the pre-match arena. Also, the amount of energy the drummers in the group brought to the stadium was amazing, and we are quite pleased with the genuine interaction that happened with the audience.”
Why did CA choose to support this particular fundraising effort for Kerala’s flood victims?

“We have been planning to introduce this idea of permitting fundraising groups for some time now. The ‘Rise and Restore Carnival’ to support the survivors of a natural calamity seemed to perfectly align with the idea. In addition to it, it was also relevant to both the countries that were playing, hence this was decided to be the pilot project to be undertaken. Also, the proposal seemed very genuine and well thought out. To be frank, this is the only group we have engaged this summer in the whole of Australia.”
John Jacob, the Secretary of the Sydney Malayalee Association advised, “Providing help to the survivors of the catastrophic floods of Kerala that occurred late last year is a cause that we hold so close to our hearts. Making use of this excellent opportunity given to us by Cricket Australia, we organised some fun-filled activities outside and inside the stadium.”
He was pleased at the amazing reception the initiative received. “It was helpful in promoting the cause behind it too. Following the many ventures like last year’s vigil at Martin Place, this is a curtain raiser to the fundraising carnival we are organising in association with the Liverpool Council in April. We see Cricket Australia’s kind gesture of allowing us to raise awareness about the carnival to a crowd of 38,000 people as a true and genuine reflection of the multicultural spirit of this country that we all call home”.
It is wonderful to see Sydney’s Keralite community continuing their efforts to help the flood victims back home restore their lives.
In an unprecedented disaster in early August 2018, some 500 people lost their lives, and a million people were evacuated from their homes.
If you wish to help with SydMal’s efforts, contact them through their website www.sydmal.com.au or come along to their Rise and Restore Carnival on Sat 27 April.