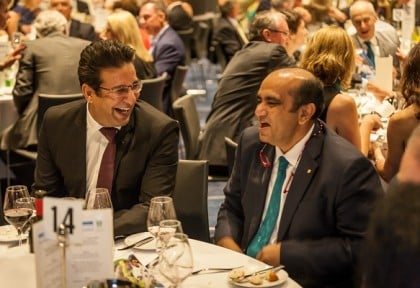 At the age of 12, a young Maasai girl made a life-changing bargain with her father: agreeing to undergo female genital mutilation in return for his promise to let her finish her education. Now 38, that girl has since been awarded a PhD in Education from the University of Pittsburgh, and is the founder and president of the Kakenya Centre for Excellence, a Maasai boarding school for girls, attendance at which requires agreement from parents not to subject their daughters to female genital mutilation or forced child marriage.


More recently, that girl, Dr Kakenya Ntaiya, visited Australia to deliver a series of stirring speeches, including a passionate address to a group of privileged guests at the LBW Trust’s annual dinner at the Sydney Cricket Ground – with none other than the cricketing great Wasim Akram also in their company. The LBW Trust provides support to economically disadvantaged students in developing, cricket playing countries to help them complete their tertiary or vocational education.

For Dr Ntaiya, although the dinner was perhaps a less formal affair than the earlier engagements on her Australian tour – which included delivering the International Women’s Day Address at the National Press Club and meeting with Prime Minister Malcolm Turnbull – her message was no less powerful.

As a young girl, Dr Ntaiya’s day would begin at 5 in the morning. By the time she had embarked on her 3-mile long walk to school, she would have finished sweeping the house, making breakfast, collecting water from the river, and taking care of her mother and her siblings. Engaged to be married at the age of five, Dr Ntaiya was acutely aware that at some stage, she would have to undergo female genital mutilation, a customary procedure prior to marriage.
At 12, it was crunch time.
“I was supposed to get married, and to be married I had to undergo the rite of passage, which is female genital cutting, to become a woman. At that time, I knew that if I go through this cut, I’m going to become a wife. And I didn’t want that. I had to figure out, at the age of 12, how to negotiate myself out of a deal that was made many years ago by my parents,” recalled Dr Ntaiya.


Yet, even after convincing her father to allow her to complete her education in exchange for undergoing the procedure, Dr Ntaiya had no idea as to the gravity of her ordeal.
Ironically, and cruelly, it was only much later, in the course of completing a university research task on female genital mutilation, that Dr Ntaiya realised the illegality of the procedure, and its horrific consequences: by reading about it online. It was at this moment that Dr Ntaiya resolved to ensure that no more girls in her village would have to go through similar suffering. Since 2008, the Kakenya Centre for Excellence has transformed the lives of 230 young women in Kenya.

The lighter side of life

On the other side of dinner, a Q&A session between Wasim Akram and the inimitable cricket commentator Mike Coward AM, revealed a fascinating insight into Akram’s stunning rise from playing tennis ball cricket in alleyways and on rooftops in Lahore, to tormenting the best batsmen around the world and changing the cricket world forever.


Akram did not play with a cricket ball until the age of 16, and even then only after being forced into it by a neighbour. As Coward himself put it, Akram’s was a chapter from Pakistani cricket’s romantic storybook of serendipitous discoveries.
Given how easy Akram made the game look – he took 10 wickets in just his second test match – it was comforting to know that he too, had to put in more than his fair share of hard work, no less evident than in his having played with Type 1 diabetes for a substantial portion of his career.

“When I got picked up for the Pakistan team, I told myself, ‘I don’t want to be a one tour wonder or a one Test wonder. Because this is fun. This is a party, and I want this party to go on for 20 years.’ And it did,” joked Akram.
Easily the most entertaining recollection of Akram’s was bowling to Sir Vivian Richards during the third test between Pakistan and the West Indies in Barbados in 1998. At one point, a skinny, 19-year-old Akram swore and sledged Richards after beating him with a bouncer or two. Richards retorted, “Don’t abuse me, I’ll see you outside”, to which Akram responded in kind, “I’ll see you outside”. After reassurance from his six-pack sporting skipper, Imran Khan, Akram continued bowling bouncers and dishing out abuse, eventually bowling Richards and giving him a huge send off.

Unfortunately, later that evening, Richards showed up at the Pakistani dressing room – dressed in nothing but a towel, with his bulging muscles on full display and bat in hand – and asked for Akram. Gaining no support from Khan this time, Akram instead fell at Richards’ feet, and promised, “Viv – this will never happen again. I’m so sorry.”

The event was described as a huge success, and during the course of the dinner, LBW Trust Chairman David Vaux confirmed that the charity had raised enough money to provide full tertiary education scholarships for each of the 26 high school graduates from the Kakenya Centre for Excellence. It was a gentle, but firm reminder of the tangible difference being made by an inspirational few.
For more information about the LBW Trust, visit lbwtrust.com.au
Images courtesy of Michael Kovacs – Kachink Photography