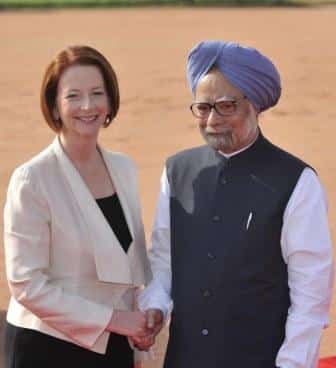 Appealing to the lowest common denominator, Australian Prime Minister Julia Gillard linked cricket to diplomacy as she announced the Order of Australia honour for Indian batting great Sachin Tendulkar. Cheesy as this announcement was, it immediately attracted the attention of the Australian and Indian media. Tendulkar will be fourth non-Australian cricketer to receive the Order of Australia honour, and has done well to bring Australia and India closer together through the skills of his chosen profession. Yet to make the announcement at a state visit to India smells of blatant diplomatic opportunism. Is this a way of buying favour and headlines in India?

Of greater interest to the Indian government has been the more proactive announcement in relation to uranium. Gillard had announced that her government would support sale of the precious yellow cake at the Australian Labor Party national conference almost a year ago in Dec 2011. This move was unanimously acknowledged by Indian diplomats and the government as a great step forward in creating a better relationship between the two countries. The announcement took a number of her senior ministers by surprise, including the then Foreign Minister Kevin Rudd. From then till now, little progress was made on the issue, although now it seems there is promise for movement.

While there have been reports of the less than satisfactory safeguards for India’s nuclear facilities, ten years after its nuclear test at Pokharan, a civil nuclear agreement is in force between the United States and India, and the country has even been granted significant trading allowances by key international non-proliferation institutions. Rather than being a pariah, India is now a nuclear friend of key Western countries.

India’s frustration with Australia’s lack of trust in its nuclear program is well known. On April 19, India tested the Agni V missile with its capability of carrying a nuclear warhead for distances of up to 5000 kilometres, in easy reach of major Chinese cities. United States State Department spokesman Mark Toner, rather than criticizing or condemning the test said that India had been “very much engaged in the international community and non-proliferation issues”, had attended nuclear security summits, and could demonstrate a “solid non-proliferation record.” This contrasts with how Australia has treated India while exporting uranium to China, a country known for allowing nuclear proliferation to Pakistan and Korea.

Australia is now promising to make progress on this issue, and the delay had been a source of frustration for those keen to get some traction on this transaction may be a thing of the past.

The Gillard government carried its own baggage to this relationship. The Labor Party’s biggest friend for India was Bob Hawke in the 1980s. Since then, successive prime ministers in Paul Keating and Kevin Rudd did not build any substantial relationships. Julia Gillard herself as education minister made drastic changes to the overseas education policy which affected thousands of Indian students and in turn, many small Indian businesses in Australia. As Prime Minister, her public statements during the pre-Commonwealth Games 2010 hysteria were ill-considered, and her government’s reforms to the Living Away From Home benefits (LAFHA) has impacted thousands of Indian workers in Australia and their employers.

Tendulkar’s honour will grab the headlines for a few hours, but a lot more work needs to be done to kickstart the relationship. Announcing the progress in uranium sales is a positive step, and the translation into action will be interesting to observe.

On another matter, NSW Premier Barry O’Farrell’s forthcoming visit to India could not have been planned at a worse time. Bang in the middle of Dussehra and Diwali, the Premier’s advisers on all things Indian seem to have forgotten that it is the biggest festive time in India and while formal functions will be attended and formalities undertaken, the focus is more on fun and family.