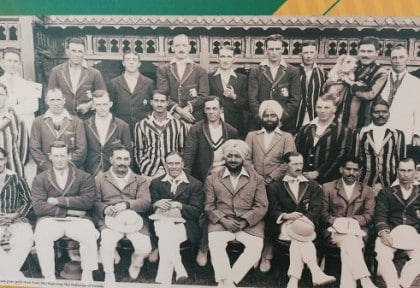 It is not without reason that, to many, the competition between India and Australia has, this decade at least, eclipsed the Ashes in terms of the quality of cricket, the evenness of the contest, and overall pure cricketing theatre. The fact that cricket is unavoidably engrained in the very fabric of each nation – as a religion in India, and a national sport in Australia – is a contributing factor. Relevant, too, is the standing of the BCCI and Cricket Australia as two of the game’s administrative powerhouses. However, perhaps the most important feature is that the fierce intensity of modern-day cricket’s greatest rivalry has been manufactured over the generations by a veritable battalion of the game’s all-time greats.
The history between the two sides is as rich as they come, and a recent exhibition at the Sydney Cricket Ground as part of the Confluence event was a warm reminder of the close bond between the countries, both on and off the field.
Set up in the Arthur Morris Room overlooking the famous SCG Ladies and Members stands, the Cricket Connects exhibition was a grand arrangement of colourful, informative and interactive displays, including the rise of cricket during the age of the British Raj in India; the first Australian tour to India in 1935-36; India’s tour of Australia in 1947-48; and an in-depth analysis of some of the more unforgettable (and forgettable) moments in the storied Indo-Aus rivalry.

Indian Link spoke with exhibition co-manager VS Ramachandran from the Indian Ministry of Culture, a die-hard cricket fan who, remarkably, is visiting Australia for the first time, along with his exhibition co-manager, Muralidharan.
“For Indians, cricket is like a religion,” explained Ramachandran. “For Australians also, from what I understand, cricket is up there. After the IPL, there’s a lot of respect for Australian players. The IPL has brought a lot of understanding between the two nations. Indians also have a lot of respect for Australian players, starting with ‘the Don’; so when India beats Australia, it’s a great achievement.”
The exhibits were very detailed, but if you missed out, we’ve picked a few of our favourite and lesser-known stories for you to enjoy.

The earliest evidence of cricket in India dates back to 1721. It was said that a group of British sailors played the game on the Kutch coast in Gujarat. The earliest recorded game of cricket, however, was not until 1751. Although the exact location is unclear, the game took place between a regiment of the British Army and a group of English settlers. It was not until the formal establishment of the Calcutta Cricket Club in 1792 that the local Indian population was associated with the game, making the Calcutta Cricket Club the second-oldest cricket club in the world, after the Marylebone Cricket Club in London (1787).

The Parsis were the first Indians to play cricket in India; the community set up the Oriental Cricket Club in 1848, and, with financial assistance from heavyweights such as the Tatas and the Wadias, the Zoroastrians Club in 1850. In the first cricketing encounter between the Parsis and a group of mostly British Europeans, the Parsis won the match by an innings and 38 runs.

Invitational tour with the Maharaja of Patiala

Australia’s first tour of India in 1935-36 has always carried with it an asterisk – it was unofficial, and did not feature any ‘stars’ of the time due to conflicting priorities of the Australian board. It was nevertheless successful, largely due to the financial assistance of Maharaja Bhupinder Singh, the ruler of Patiala, who put up a sum amounting to 10,000 pounds for the entire tour.

Due to the restrictions imposed by the Australian Cricket Board, the Australian team itself was a liquorice allsorts; for instance, Bert Ironmonger was aged 53, and Ron Morrisbey, 21. Four unofficial tests were played in Bombay, Calcutta, Lahore and Chennai. The team played a staggering 23 games in total, including exhaustingly long commutes by train. Many players fell ill, and the tour was only completed thanks to the help of a number of ring-in Australian tourists, and, astonishingly, the Maharajah himself, who sometimes played in the Australian team.

In a mark of the strong foundations of the relationship between the two nations, India’s first international cricket assignment was against the Australians, in the immediate aftermath of independence. The timing was, perhaps, unfortunate; Partition had an impact on the composition of the team, with several last minute withdrawals due to the ongoing geopolitical issues as well as injury.

In particular, players such as Fazal Mahmood dropped out, pledging allegiance to Pakistan; meanwhile, Gul Mohammad and Amir Elahi (each of whom went on to represent Pakistan) retained their places in the Indian team, but made clear that they would be migrating to Pakistan upon returning home. The assassination of Mahatma Gandhi during the tour also deeply affected the Indian players.
However, the tour was also fondly remembered as Bradman’s last Test series at home. At the MCG, Bradman scored a century in each innings for the first and last time in his career; notably, India’s own Vijay Hazare matched the feat in Adelaide.

Cricket Connects reminded its audience that Anzacs and Indians fought alongside each other in the trenches of Gallipoli during World War I – in fact, ANZACs were known to come and share the Indian soldiers’ rations because roti and daal was said to be far more palatable than salted bully beef and biscuits.
The India-Australia rivalry may be a fierce one over 22 yards, but the depth of the connection between the two nations is indisputable.