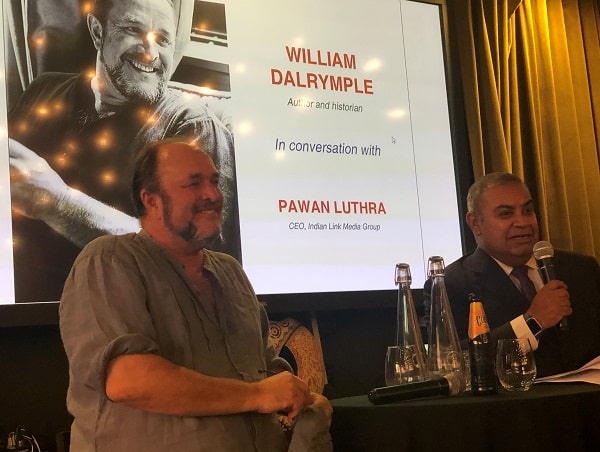 Of course, there was murmur in the British Parliament since the early 1800s about the dangers of allowing a trading company – one that the British government had so little control over – to rule over 100 million people. It caused rampant corruption, seeing a small group of men make an obscene amount of money.

In 1833 the British Parliament passed a bill removing the Company’s power, but it was so strong that it wasn’t until the 1870s that it finally died a quiet death, Queen Victoria taking over as ruler of India. Yet, your last sentence is quite chilling.

William Dalrymple: There are really two stories in this book. One is about the Company’s conquest of India, which is a historical story. The other story, sort of a meta-story in itself that runs all the way through the book, is the story of the power of corporations versus the power of the state. And that, of course, is a story with an unfinished conclusion. It’s a contemporary story.

I’ve just come back from a book tour in the States. Elizabeth Warren is bringing up these issues about the power of big pharma, big data, big money. The story of the Company is the story of the institution which first invented so many of the things we associate with corporations today. Corporate lobbying is invented by the Company, which is also the first company to really be multinational and to straddle the globe.

It’s the first company which realises that a rich company can actually change foreign policy and that if you influence parliament, the interests of your shareholders consume and become the interests of the state. Every modern democratic nation of the world has some stories of this being the case in the 20th century.

There were three famous moments when corporations brought down governments. 1953, Anglo Persian Oil Company gets rid of Prime Minister Mossadegh of Iran, the only freely, democratically elected Iranian premier.

The first thing he wants to do when he comes to power is to nationalise the oil industry: the CIA and MI6 topple him and replace him with the Shah. 1955, Guatemala, the United Fruit Company owns 42 per cent of the cultural land: a socialist government is elected which promises to redistribute land more evenly to the people of Guatemala. The government is toppled by the CIA, producing the phrase Banana Republic. 1973, Salvador Allende in Chile is brought down by the CIA. (Following this, we see) the most brutal human rights abuses in South American history.

So you don’t have to be a, you know, vegan, anti-globalisation, bandana-wearing nutcase to recognise that corporations do this sort of thing. It’s part of history. Corporations can bring down governments. They can skew foreign policy. They can change the way governments operate. And the Company not only is the first to invent corporate lobbying but to realise that the 40 per cent of employees in parliament who own shares can be used to influence foreign policy in its favour.

They also realise that you can bribe parliamentarians. So in 1697, for the first time in world history, the East India Company is caught bribing members of Parliament with share options if they vote to extend its monopoly.

Now, this obviously is something which continues in the shadows in every democracy in the world. Corporate donations in any country outbid private donations, and they come with some sort of quid pro quo which is never made public, whether it’s Adani or Advani or Ambani.

The most obvious question in modern history was, given the closeness of Dick Cheney to Exxon, was it an accident that it was Iraq that was invaded after 9/11, when Iraq clearly had nothing to do with 9/11? So the way that foreign policy can be changed by a big corporation has its roots in the history of this company.

We’re not just talking a story, a specific historical story of the conquest of India. This book is about the origins of corporate lobbying, corporate influence and the ongoing and unfinished story of how far corporations can change the world.