Celebrations broke out in the Congress camp with workers setting off firecrackes and distributing sweets as Patel reacted saying 'truth alone triumphs'. 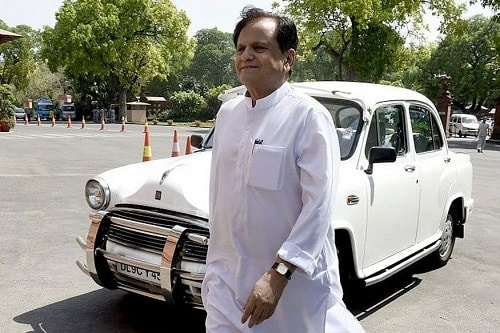 “This is not just my victory. It is a defeat of the most blatant use of money power, muscle power and abuse of state machinery,” Ahmed Patel tweeted after winning RS polls.

Ahmed Patel dealt a severe blow to the BJP when he won the Rajya Sabha election in Gujarat in a cliffhanger contest in which the top BJP leadership staked its all by backing a Congress defector.
BJP President Amit Shah also won the election to make his debut in parliament while Union Minister Smriti Irani got another term in the upper house.
Patel got 44 votes that was just enough to beat his rival Congress defector Balwantsinh Rajput and earn a fifth term in Rajya Sabha while Shah and Irani got 46 and 45 votes respectively in the counting that was delayed by over nine hours because of the Congress challenge in the Election Commission first and the BJP’s objections before the returning officer past midnight.
Celebrations broke out in the Congress camp with workers setting off firecrackes and distributing sweets as Patel reacted saying “truth alone triumphs”.
“This is not just my victory. It is a defeat of the most blatant use of money power, muscle power and abuse of state machinery,” he tweeted.
Patel thanked his party MLAs, workers and the leadership for the victory and said under Rahul Gandhi’s leadership, the Congress will get strength and win Gujarat assembly election.
In a jibe at the BJP top leadership, Patel prayed to God that everybody be given good sense.
Senior Congress leader P. Chidambaram, who was part of a Congress delegation that met the Election Commission on Tuesday seeking rejection of votes of two Congress rebels said: “Money, muscle and manipulation could not win in the Gujarat Rajya Sabha elections.”
“BJP can break a few weak Congress MLAs but BJP cannot break the Congress party,” he said in his reaction.
The victory that came as a major boost to Congress has been battered in many elections in the last three years and did not come easily given the fact that the whole of Tuesday was marked by high drama and allegations, counter-allegations and high-pitched legal battle in the Commission over votes of two rebel Congress MLAs.
The first setback for the BJP came after the poll panel upheld the Congress complaint seeking rejection of the two votes by Bhola Bhai Gohil and Raghavji Bhai Patel, both loyalists of Shankarsinh Vaghela, who had shown their ballots to Shah and Irani against Conduct of Election Rules.
The Commission rejected the arguments of a high-powered BJP delegation led by Arun Jaitley that the Commission had no power to intervene in the matter as retunring officer is the statutory authority to decide the validity or otherwise of ballot paper.
This was countered by the Congress delegation that asserted the Commission was the only authority to decide on the issue in keeping with the precedents set by it in Haryana last year and in Rajasthan in 2000.
In the Gujarat assembly with an effective strength of 176 MLAs, the numbers were enough for a comfortable victory for two BJP candidates and one of Congress.
But the BJP made it a prestige fight in Gujarat from where both Prime Minister Narendra Modi and Shah hail in an apparent attempt to inflict another crushing blow on the Congress in the assembly elections scheduled later this year.
The battle became bitter between the powerful BJP ruling both at the Centre and in Gujarat and the political secretary to Congress President Sonia Gandhi when defections were engineered from the Congress first by friend-turned-foe-turned ally Shankarsinh Vaghela and six other MLAs who resigned from the Congress.
From 57, the Congress strength came down to 51 when Vaghela quit the party while six of his loyalists quit the assembly. The strength further came down when six of the MLAs defected to the BJP reducing his backing to 45. The Congress had to shepherd 44 MLAs to Bengaluru to counter poaching by the BJP.
On the day of reckoning, Ahmed Patel had 44 in his bag along with the backing of one NCP and one JD-U MLA though there was day-long speculation on how the two allies voted.