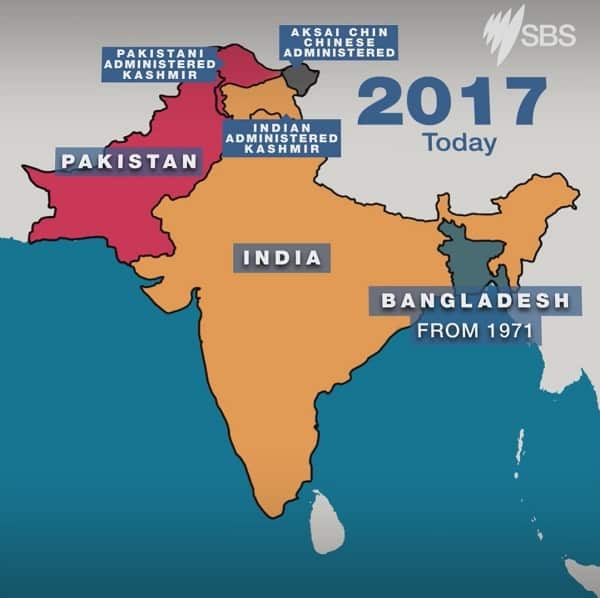 Reading Time: 2 minutesFollowing a huge outcry in the Indian-Australian community over the controversial depiction of Kashmir in an SBS video about Partition of India, the national public television network has quietly modified the map.


While the earlier map showed the entire Jammu and Kashmir state as disputed territory – which had raised the hackles of several Indians – the modified version of the video (see here) clearly shows Indian-administered Kashmir, Pakistani-administered Kashmir on the state’s western edge and the Chinese-administered Aksai Chin region on the state’s north-east tip.
SBS has also taken down the earlier video.
Indian Link had, in its Sydney edition for the second fortnight of August and Melbourne edition for September, carried a cover story on the community’s outrage after SBS broadcast the map. The story had also reported on the strong action taken by the Indian government authorities in Australia on the episode.

India’s High Commissioner to Australia, Ajay M Gondane, had issued an ‘oral demarche’ to the Australian government on the subject. India’s Consul General in Sydney, B Vanlalvawna, had also written to SBS, conveying its ‘strong objection to this wrong depiction,’ and provided it with the approved political map of India.
Some Indian-Australians had also approached their respective public representatives over the issue, prompting Michelle Rowland, Member for Greenway, to write a letter to Michael Ebeid, CEO and MD and SBS on the subject.

Balesh Dhankhar, an Indian living in Sydney, had also launched an online petition, addressed to Minister for Communications Mitch Fifield, on change.org. It had received over 5,300 supporters in a little over a fortnight.

SBS had earlier issued a media release, strongly denying the allegation made in the online petition that SBS was ‘anti-Indian.’
Referring to the change in the graphic, an SBS spokesperson said, “To assist our audiences to better understand administrative arrangements in the Kashmir region, SBS has made some enhancements to the map in the story on the SBS World News Facebook page for clarification.
“SBS is always mindful of community sensitivities when reporting on global issues and tensions such as this and ensures it remains impartial and balanced in its reporting. SBS has long been a supporter of the Indian community as it is to all the communities we serve.”
- Advertisement -

It remains to be seen whether the modified version of the map mollifies the outraged members of the Indian community.