Which Bank celebrates the best Diwali? Yes… that one. 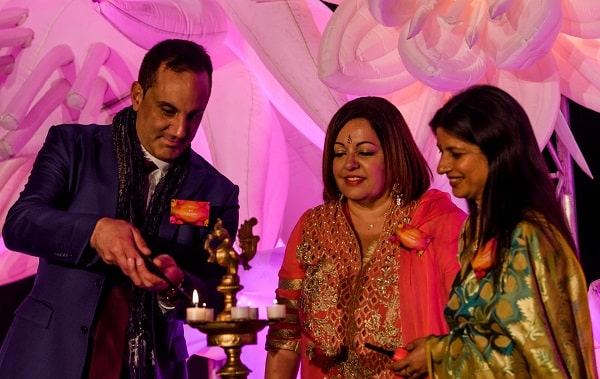 For the seventh consecutive year, the Commonwealth Bank of Australia celebrated Diwali not only for a number of its Indian-origin employees but also to thank their customers and supporters for their patronage of the bank.

At the other banks, which 3-4 years ago were making an attempt to reach out to Indian-Australians in the celebration of their most popular festival, these days this is left to the initiative of a local branch if they wish to do so.

However, CBA not only encouraged celebrations at the branch level but took it to a whole new level with a full pomp and dance show at the Waterview Restaurant at Bicentennial Park.

Since 2014, CommBank has gained much acclaim for its diversity program Mosaic. It has set diversity targets for senior leadership and aims to increase the representation for women in its senior ranks, as well as to have one in 5 senior employees from a diverse background by 2020. It has brought in initiatives such as the corporate hijab and an African internships program. It also sees traditional celebrations of major world festivals such as Chinese New Year and Diwali.

Gunjan Pagare (Executive Manager of the bank’s Community and Customer Vulnerability Programs), told Indian Link at the Diwali event that the bank strongly believes in the benefits of multiculturalism. “In our latest annual report, we have about 28% staff who identify their ancestry as Asian whereas the 2016 Australian Census has 14% in the same category. So, yes, we encourage the branch staff to celebrate Diwali and here we have our stakeholders who are enjoying the CBA Diwali.”

Jenny Morton, Head of International Premier and Retail Banking also acknowledged the 470 customers, staff and community leaders in the room. In her welcome address to those attending, Jenny shared the story of a successful Indian migrant who has a strong link with the bank. “He went through his own challenges of making a home for himself in his new country by working, studying, forgoing sleep, and as a client at this bank. Today he is a successful individual and an employee at CommBank.”

She added, “Diwali is a time to let the negativities go and acknowledge the strengths in yourself and those around you.”

All gathered were appreciative of the efforts which CBA was taking to host a fun-filled evening. With headline news in the recent past, during and after the Hayne Royal Commission, largely negative for the banking industry, it was good to see a bank doing what its core job is – connecting with their customers.

As the evening wore on and after dinner, the dances by the Nupur Dance School, gave away to the sound of the dhol and bhangra, as the dance floor filled up to capacity and the guests let their hair down. The energy and the spirit in the room was amazing as Diwali was celebrated.

The Goddess of Wealth Lakshmi, who is worshipped at Diwali, would indeed have been pleased at the bonhomie between the suppliers of wealth and its consumers, at the Commonwealth Bank’s Diwali celebrations.