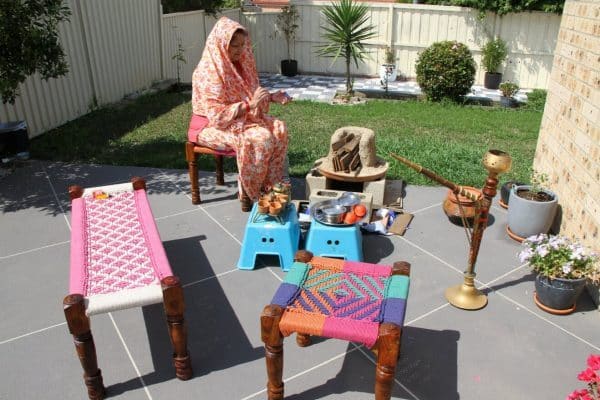 “Those who haven’t tasted food cooked on a chulha, cannot imagine its flavour and health benefits,” says Dr Madhvi Mohindra who is known as the ‘desi girl’ in her social circle, and not for nothing.

After all, Mohindra is keeping alive the Indian traditional style of cooking food on a chulha in the backyard of her Parklea home and regularly dishes out delicacies like dum biryani, sarson ka saag, kali dal and kadhi, apart from a variety of non-vegetarian preparations. Her chulha cooked aloo-baingan, aloo tamatar, baingan bharta and tea are also much sought after.

In today’s era of slow cookers and air friers, the Sydney socialite still derives the most satisfaction of cooking on the chulha, a small earthen or brick stove that she has developed from scratch, with the help of her foodie husband Vikram. They use it extensively when entertaining guests, especially on cold wintery weekends. Invariably, people can’t stop raving about the unmatched flavour.

Madhvi fires up the chulha with wood and charcoal, but the media professional-cum counsellor really wishes she could use ‘uplas’ – cakes of cow-dung that have been the traditional Indian fuel and continue to be used even now in rural areas.

Also, she sticks to desi ghee and mustard oil while cooking, in order to keep the flavours authentic, as well as the food healthy.

Divulging her reasons for still seeking out the chulha over modern styles of cooking, Mohindra says the idea was ingrained into her in her childhood – having lived in parts of parts of Punjab and Haryana courtesy her father’s transferrable job.

“I remember the cook used to prepare food in a clay pot on the chulha, and on days that it rained, and the gas stove had to be used, we didn’t enjoy the meals at all,” she recalls.

So, after marriage, when they moved into their own home in Gurugram, the couple decided to put a chulha on the roof. “Nobody believed I would be able to make it work, but I started dishing out lip-smacking non-vegetarian dinners on summer nights. We hosted a lot of get-togethers,” she shares.

The couple moved to the Fiji Islands in 2001 and then to Adelaide in Australia in 2009. “I developed a passion for cooking in all these years, picking up different styles and techniques of cooking. Even in Adelaide, I used bricks for a make-shift chulha, and would sometimes fire it up in the evenings,” she says.

The chulha she uses now has been perfected over several weeks, and after plenty of hits-and-trials.

Since she needed a raised structure, she first experimented with a pulley on which she put a marble slab over bricks and riverside mud soaked in water. It worked, but failed soon as cracks developed in the mud. She did a bit of research, visited a few barbecue and tandoor retailers for ideas and tried again with hard mud this time, even going to the countryside to bring home some cow-dung for binding.

She finally managed to put a chulha together that works a bit more lastingly. It was constructed with ash from restaurants for insulation, a layer of wet mud, and plenty of grass and backyard mud for the actual chulha resting on bricks.

Despite all the effort, it only works for a couple of times and then needs to be rebuilt. “It’s not cost-effective at all, and the cooking time is very long. The other problem is of the smoke that it causes – it gets into everything – from the rooms to the eyes to even the clothes. So usually it’s just me doing most of the cooking and the repeated stirring, that too a day before the party to avoid causing any inconvenience to the guests,” she admits.

Well, Madhvi is not letting the fire die out, so to speak. She dreams of starting a nukkad snack centre in her backyard after retirement, selling wood-fired samosas with kulhads of tea.

But that’s for another day!