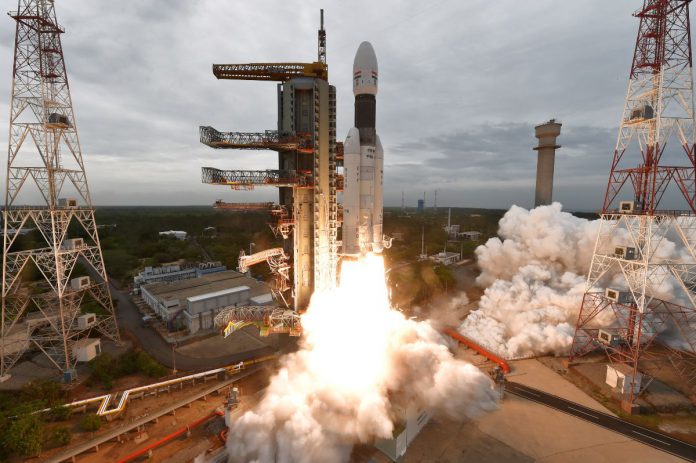 
“The historic launch of Chandrayaan 2 from Sriharikota is a proud moment for all Indians. Congratulations to our scientists and engineers for furthering India’s indigenous space programme. May ISRO continue(s) to master new technologies and continue to conquer new frontiers,” the President said in a tweet.
Noting Chandrayaan 2 will be the first spacecraft to land close to the moon’s South Pole in some 50 days from now, he said: “The mission is expected to lead to new discoveries and enrich our knowledge systems. I wish the Chandrayaan 2 team every success.”

He said the launch of Chandrayaan 2 illustrates the prowess of our scientists and the determination of 130 crore Indians to scale new frontiers of science.
“Every Indian is immensely proud today!… Indian at heart, Indian in spirit!” Modi said in a series of tweets.
He said the fact that Chandrayaan 2 is a fully indigenous mission is making every Indian overjoyed. “It will have an Orbiter for remote sensing the Moon and also a Lander-Rover module for analysis of the lunar surface.
“This mission will offer new knowledge about the Moon. Efforts such as Chandrayaan2 will further encourage our bright youngsters towards science, top-quality research and innovation.
“Thanks to Chandrayaan, India’s Lunar Programme will get a substantial boost. Our existing knowledge of the Moon will be significantly enhanced,” Modi said.
“The launch is a proud moment for the country and its people. This is a fantastic example that our scientists have the talent and conference to overcome all hurdles,” Modi said in his 3.21-minute audio message to the ISRO.

Mission Moon
The Geosynchronous Satellite Launch Vehicle-Mark III (GSLV-Mk III) blasted off from the second launch pad at the Satish Dhawan Space Centre (SDSC) in Sriharikota spaceport at 2.43 pm to begin its ascent into space.
About 16 minutes into its flight, the rocket put into orbit Chandrayaan 2 to begin its 48-day journey to the Moon. The success of the Chandrayaan 2 mission will make India the fourth country in the world to land a vehicle and travel on the Moon surface after the US, Russia and China.
IANS
- Advertisement -
Share
WhatsApp
Facebook
Twitter
Linkedin
Previous article'Golden girl' Hima Das promises more medals for India
Next articleA 13-day luxury road trip through the Balkans – Croatia, Slovenia and more