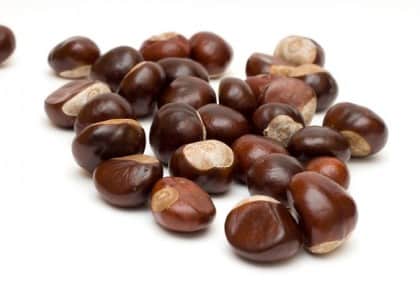 The ‘old chestnut’ is new again

Chestnuts really are a superfood – super versatile and super healthy. With a delicate, unique flavour, chestnuts can be used in a variety of savoury and sweet dishes. Available from mid-March through to July, they contain high levels of vitamins C and E, fibre and folate, and, unlike many other nut varieties, are low in fat and oil content.
Chestnuts are actually more like a fruit than a nut. Grown on trees, the nuts are sheathed in a spikey husk with around three nuts in each burr. When ripe, the fruit falls to the ground and the husk splits open to reveal the smooth-shelled nuts.

Chestnuts are quite distinct from other nuts in that their natural goodness is obtained through cooking. They should not be eaten raw, owing to their high tannic acid content which can cause digestive issues.
Chestnuts have two skins. One is the hard, outer, shiny brown shell and the other is the thin inner skin known as the pellicle.
To prepare chestnuts, you can bake, microwave, roast or boil the nut before incorporating into your recipe. The most important step is to cut into the shell to prevent the nut from overheating and exploding while cooking. You can make a shallow cut into the flat side of the shell across the face of the nut, or cut a cross into the flat-end. Peel chestnuts while they are still warm as they can be tricky to peel when cooled. You can choose to remove both the inner and outer shell, or keep the pellicle intact.


“Historically the chestnut is popular for roasting and once the outer shell is roasted, the pellicle comes away pretty easily,” says Chestnuts Australia member and grower Jane Casey. “However, in the early season varieties, this is not the case, yet people try to discard the pellicle. With what we know now, the pellicle’s health benefits are so significant that we are eating it too.”
Research carried out by the New Zealand Chestnut Council found that chestnut pellicle has an especially high condensed tannin content, which is known to have beneficial cardio-protective, anti-inflammatory, anti-carcinogenic and anti-glycaemic effects. This means it can be useful in lowering blood glucose levels in diabetics, can help fight obesity and has anti-oxidant and anti-allergy properties.

Having been grown in Australia for over 100 years, chestnuts are well worth the patience and time needed for their preparation.
For more visit chestnutsaustralia.com.au

To roast
Preheat oven to 200°C (180°C fanforced).
Place prepared chestnuts onto a baking tray and bake for 15 to 20 minutes or until the shells split open.
To grill or barbecue
Place prepared chestnuts on a tray under a moderate to hot grill, or place chestnuts directly onto the barbecue grill, turning a couple of times, for approximately 15-20 minutes or until the shells blacken and split open.

Method
Heat oil in a large saucepan over a medium heat. Add leek and garlic and cook, stirring often, for 3-4 minutes until softened.
Add chestnuts and cook, stirring occasionally, for 5 minutes. Add stock, cover and bring to the boil. Reduce heat, cover and simmer for 5 minutes. Stir in spinach and peas. Cover, reduce heat and simmer for 3-4 minutes until peas are tender.
Remove from heat and puree with a stick blender until smooth. Season to taste.
Ladle into bowls and top each with a dollop of sour cream. Sprinkle with chestnut crisps* if liked and serve.
Note: This soup thickens on standing – add extra stock if necessary.
*To make chestnut crisps; slice 50g of cooked and peeled chestnuts in a little olive oil in a frying pan over medium-high heat, tossing often, until golden. Drain on paper towel

Method
Cut chestnuts in half across the width of the chestnut.
Place prepared chestnuts into a saucepan of cold water and bring to the boil.
Simmer for 15 to 20 min. Remove the chestnuts one at a time from the water.
Wrap in a clean tea towel for 5 to 10 minutes. While chestnuts are still warm, quickly peel off the outer brown shell and remove the papery thin skin underneath.
Preheat oven to 180°C. Lightly grease an 8-cup deep ovenproof dish.
Finely grate chestnuts in a food processor. In a large bowl, combine milk, egg, butter and golden syrup. Stir in chestnuts, sugar and sifted flour. Using a large metal spoon, mix until just combined. Spoon into the prepared dish.
To make the sauce, combine sugar and cornflour in a small bowl. Sprinkle over pudding. Combine water and golden syrup in a jug. Pour mixture over the back of large metal spoon over the pudding batter. Place dish on a baking tray lined with baking paper.
Bake for 50-55 minutes until golden and pudding bounces back when gently pressed in the centre. Stand for 5 minutes. Dust with icing sugar. Serve with cream or ice-cream.