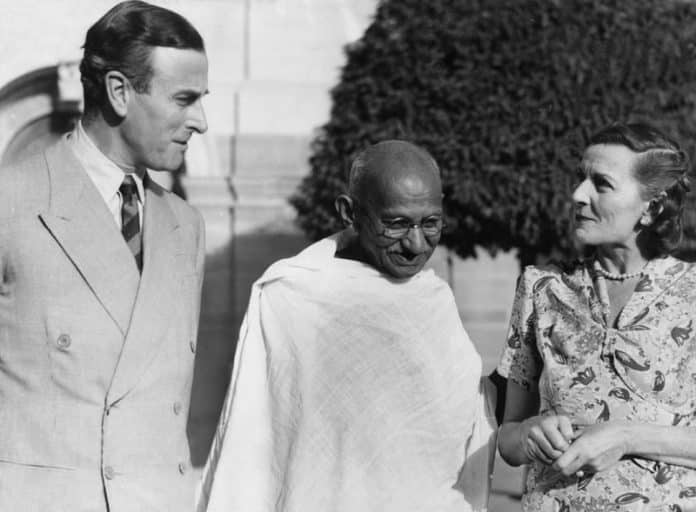 Reading Time: 3 minutesAs part of the Fashion Hub 2019 presented by Sydney’s Sherman Centre for Culture and Studies, Bandana Tewari – a fashion journalist and formerly the editor-at-large of Vogue India – presented a keynote on ‘Politics and Fashion’.  Her focus of interest – Gandhi’s sartorial choices and their impact on the politics of the time. Standing against a colonial power that demonstrated might through regalia, pomp and ceremony, Ms Tewari highlighted that Gandhi consciously chose to demonstrate the more benevolent values of sarvodaya (the greater good) and aparigraha (detachment) through his clothing. The khadi loincloth worn by Gandhi was juxtaposed against the finery on display by colonial rulers.
And in choosing this attire, he represented a sharp contrast to the standards of the empire – which sought to evoke an unchallenged belief in the authority of its rule. Gandhi, in comparison, favouring less superficial values, used his clothing to compel the junta and foreigners alike to think more curiously about fundamental values including freedom, equality and self-determination.


That he used his choice of clothing, his body and his whole life as a statement of principle and virtue, is self-evident. What is not so evident on a surface level are the echoes of his teachings that apply today.
Ms Tewari drew insights from Gandhian principles and provided guidance for fashion consumers today. She put forward that as consumers, we have a duty to ensure that our choices are well-informed, considered and not divorced from the economic realities of their manufacture.
Gandhi’s belief in environmental sustainability – that we should leave nothing but our footprints on this earth – and in espousing a non-materialistic view of the world is at odds with our modern consumer society. The question is, how does one reconcile these two opposing forces?
Ms Tewari suggested, “Being a self-aware consumer and making responsible choices that consider the principles of aparigraha is a positive start.” (Aparigraha is the notion of limiting our possessions to only that which serves our needs).

She also affirmed that there needs to be a balance between choices – between doing what’s convenient while acknowledging one’s values.  A practical example she offered was guidance that it’s perfectly reasonable to have sartorial options – someone can still be an Indian and wear western clothes while acknowledging the history and art of ethnic wear for formal occasions like weddings.
And what of grass roots movements for more sustainable practices in production? Ms Tewari offered a well-informed and nuanced view of this. While western efforts to encourage local sustainable production are noble and well meaning, to effect change, such initiatives must come from within India and operate at the kind of scale that can genuinely foster progress. Outside efforts simply cannot operate at the size required to make a difference in India. A widespread solution could require Indian government impetus.
In her keynote speech, Ms Tewari traced Gandhi’s journey from Anglophile dandy lawyer in South Africa to the “half-naked fakir” at the centre of Pax Britannica in London.
In a deft irony, the outward appearance of this anti-materialistic man was used as the ideal metaphor to show his spiritual and political journey – from a lawyer in South Africa to a man who stopped an empire in its tracks. Comparing the might and splendour of the British Empire, all brass buttons and braided epaulettes, with the simple homespun cloth of the lungi, is a powerful expression of Gandhi’s philosophy and was an example for all his followers throughout the 1940s. This example still lives on in the attire of much of modern India’s political class some seventy years after Independence.
Through this we can see how fashion and politics are linked through the language of the garment as an expression of a set of beliefs.
This insight was drawn courtesy of the Sherman Centre for Culture and Ideas, which positions itself as “a vibrant platform for challenging ideas on architecture and fashion.” It certainly delivered to this aspiration!
- Advertisement -
Share
WhatsApp
Facebook
Twitter
Linkedin
Previous articleStop this China obsession, India is more your cup of chai
Next articleMelbourne Sikhs celebrate Vaisakhi in colourful glory