Goodness gracious me. A medico does stand-up. 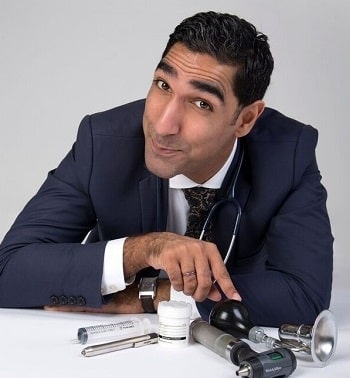 Reading Time: 3 minutesThey say laughter is the best medicine, so how much better when it is administered by a highly-qualified doctor. This year’s Adelaide Fringe featured Dr Ahmed Kazmi, a UK-based doctor of Pakistani origin, who has taken to the stage as a stand-up comic, in his show Doctor in the House.
As he bounded on to the stage in a glitzy-sequined jacket to loud music, he announced, “This evening I am your physician, you are all my patients so I’ll ask you to remove all your clothing.”

As the crowd burst into laughter, it was clear that he had won the audience over at the very outset. With the performance completely sold out and an audience comprising many from the medical profession, it was certainly going to be an interesting evening with much knowing, sympathetic laughter.
As Dr Ahmed went through the evening, one had to admire his ability to portray characters vividly. So he would put on accents, take on the mannerisms of young ladies or the elderly as required or the crotchety responses of difficult patients. He is clearly an acute observer of people and situations around him, and is able to tease out the funny side of things and bring them to his audience in a punchy manner.
There were no taboo subjects for Dr Ahmed. Not shy to mention his Muslim heritage, he talked of being racially profiled at airports, referred to his ‘mocha’ skin and was quite happy to talk about his stereotypical pushy mother. But now being a doctor keeps mum happy and being a comedian keeps him happy. In each case, he did not sugar-coat the topic but brought it out in a humorous manner for the audience to see the absurdity or the funny side of things.

Having worked in Perth at one time, Dr Ahmed had plenty of amusing Aussie medical anecdotes to relate, which he did putting on a quite dinkum accent as well. And in the middle of the show, he surprised us all by bursting into a cabaret-style rendition of the Home and Away theme song.

Part of the show included advice to medical students about issues they may face. His first tip was to make sure the practitioner sees the right patient. As Dr Ahmed explained he has been right through consultations only to find at the end that the person he is seeing is not who he was expecting to see. He has had issues where patients enter his office and actually sit down on his chair next to the computer. Or where some patients, and in his experience mainly men, when asked “So what is the problem,” come up with the answer “You are the doctor, you tell me.”
Some advice to patients was to dress appropriately when visiting their GP. He gave the example of a young lady who had hurt her knee but came in wearing tight jeans. As the jeans would not roll up above the knee he suggested she take them off so he could examine the knee only to be told she wasn’t wearing any knickers.
Thinking about it, many of the anecdotes were perhaps surprising but not necessarily funny. What brought out the humour was the poise, the delivery, the actions, the timing, and the-off-the cuff asides. The gestures with the face and hands, and small things like drumming together of fingers to denote a love of money, all added up to making people laugh, enjoy and indeed respect a super performer.
So how do you close out an excellent night of comedy and cabaret. Singing cabaret style is Dr Ahmed’s other love and we were treated to a hilarious and unexpected rendition of Let it Go from Frozen, complete with a tiara, wand and cape. Then to top it all, a Bollywood death scene finishing with an energetic bhangra/Bollywood dance number.
He described it as ‘a happy ending.’