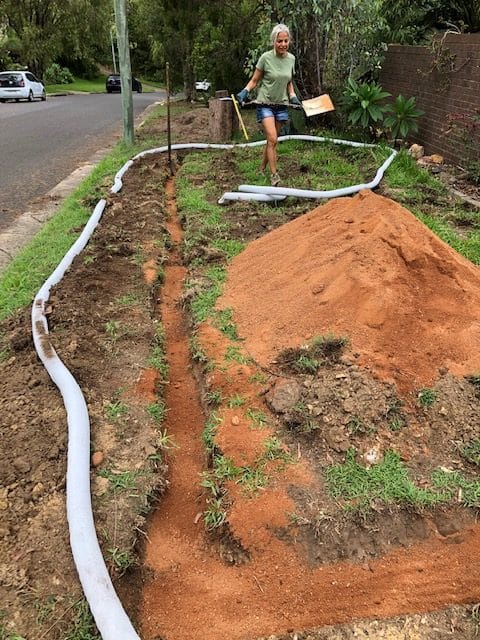 The recent level 2 water restrictions in NSW got Gauri Maini thinking about her own carbon footprint. She found it increasingly difficult to maintain the young plants in her garden and began replacing them with Australian native plants that would help increase biodiversity.

That’s when she came across the environmental levy grant in the Ku-ring-gai Council newsletter. Around that time, she also became aware of the work done by Michael Mobbs (who has been living off grid in Chippendale for 20 years and is an expert in providing low cost, simple solutions to cool cities). Gauri pitched for a grant especially when she read more about Michael’s work in designing gardens that retain the rainwater in the soil.

Having procured the grant, she began work on designing the smart street garden.

“We know from statistics published by the Bureau of Meteorology that up to 90 percent of rainfall is lost to our storm water systems, carrying pollutants with it which can be useful for enriching the soil,” she explained. “In order to retain rainfall, AG pipes, which are essentially perforated pipes that collect and evenly disperse rainwater, are laid 10 centimetres deep along the perimeter of the garden, on a bed of gravel. This helps soak in the water and retain it for even distribution, deep into the sub strata.”

She went on, “The ground is also levelled such that rainfall is directed towards the garden instead of into the streets and storm water systems. So the AG pipes and soil retain all the moisture deep where the root systems of the plants can get it when they need it. In addition, the garden incorporates in-ground composting that turns all food waste into precious nutrients through worm activity, thereby reducing carbon emissions from the alternate, which is transporting food waste to offsite recycling or worse, landfill.”

Existing high maintenance lawns were replaced with drought resistant Australian native plants. These establishing plants and soil moisture will enable a cooler micro climate. Gauri intends to continue measuring this on an ongoing basis as the garden establishes.

For an 80 square metre garden, the cost of materials was $850 plus labour and design costs. Gauri did the landscaping herself to minimize costs; she says that this design can easily be replicated by anyone who wishes to do so.

“If one or maybe 500 of you decide to build a smart street garden around similar design principles, we could potentially save millions of litres of water, create cooler micro climates around our home, reduce pollutants in our water systems and create habitat diversity for bees, animals and birds.”

Gauri hopes that more and more people will take up this initiative that is so easily achievable.

“We have a councillor interested in providing similar benefits to residents. We would be very happy to share design and implementation notes to facilitate adoption, so more people can do their bit in promoting biodiversity, cooling climate, reducing waste and water consumption,” she concluded.