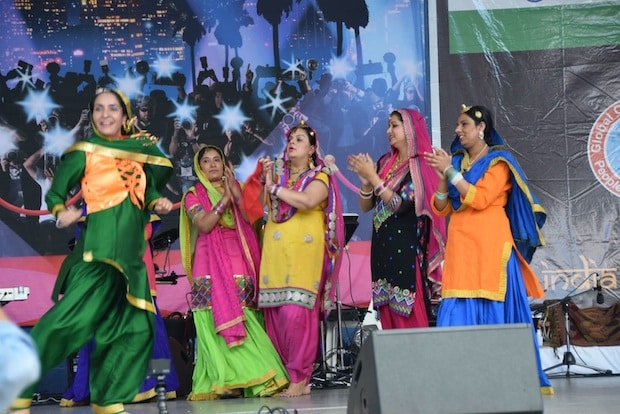 Dresssed in traditional Indian attire, be it kurtas, lehengas or saris, Indian origin people bustled through Roma Street train station, or made a dash from their cars, to make it on time for the celebrations of India’s 68th Independence Day. The India Day Fair, organised by the Global Organisation of People of Indian Origin (GOPIO) on 10 August at the Roma Street Parklands, was an opportunity to reminisce and savour all things Indian from morning until late evening.

Celebrations were kick-started with a parade of various associations representing their states and cultures of India on a warm Sunday morning. There were the Kashmiri Pandits, Tamil, Punjab, Goan, Maharashtra Mandal, Kannada Sangha, Telugu to name a few and, for the first time, representatives from the newly formed state of Telengana.

Australian and Indian dignitaries attended the Fair, including Lord Mayor Graham Quirk, Glen Elmes, Minister for Aboriginal and Torres Strait Islander and Multicultural Affairs and Archana Singh, Honorary Consul of India for Queensland. The Australian and Indian flags were hoisted by Glen Elmes and Archana Singh respectively, which was followed by the national anthems of each of the countries’ to mark their respect for one another.

Honorary Consul of India for Queensland, Archana Singh paid tribute to 1.4 million British Indians who lost their lives during World War I. She continued, “India’s community ensures diversity, and today we celebrate India and her contributions”.

Keeping true to the spirit of the Indian culture, Lord Mayor Graham Quirk was dressed in a kurta. Speaking at the opening ceremony of the India Day fair, he emphasised his fondness for the Indian community and culture.

Echoing similar sentiments, Glen Elmes said, “There is a spirit of fun, extravaganza, saris and colours. I look forward to coming to all the future (Indian) events. Thank you for today’s invite”.

As the crowd hummed along to the familiar tunes of Vande Matram and Aye mere watan ke logon, which were sung beautifully, a few were teary eyed as they were transported back to Indian soil.

Following the opening ceremony, different age groups, both young and old, showcased their singing and dancing talent and enthusiasm from all corners of India. Traditional Bharathnatyam, Punjab folklore, and Bollywood performances kept the crowd enthralled. There was non-stop cheering and dancing.

Indian food is synonymous with any Indian event, and this Fair was no exception. Stalls of different cuisines were lined up with finger licking curries and rice, chaat, authentic South Indian delicacies and a stall with interesting tangy and sweet Indian flavoured juices – Aaam Ras, Imli, Jamun, Kachha aam and also Ayurvedic stalls.

A plendid display of fireworks at dusk concluded the India Day Fair celebrations, and left us all eagerly awaiting next year’s fair.

What's On in Brisbane