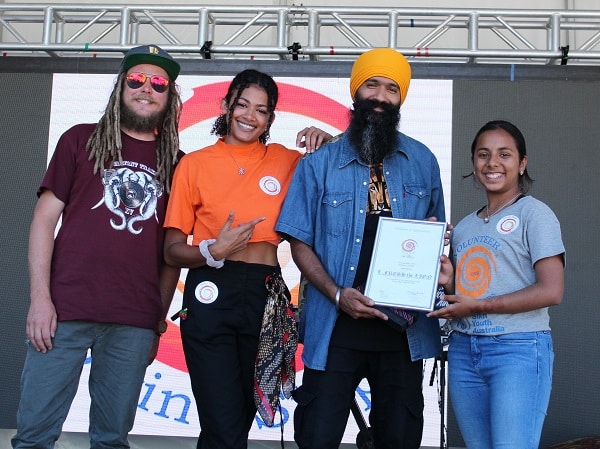 One of Guru Nanak Dev’s most quotable quotes was seen in action at the recent Divine Steps Festival organised by the Sikh Youth Australia (SYA). What better way to mark the 550th birth anniversary of the spiritual leader of the Sikh faith Guru Nanak, than to bring together our brothers and sisters from all the other faiths with whom we live, and hear from each other.

Choosing to present a multifaith devotional music tribute to their founder, SYA found a way to honour his philosophy of progressiveness and humanism. At the same time, it showed the relevance of Sikhism in a deeply polarised contemporary world at the Divine Steps Festival.

A daylong event at Sydney’s Pyrmont Bay Park brought the city’s Sikh community out to share their faith’s basic tenets of unity and humanity. Hindu, Jewish, Muslim, Sufi, Baha’i, ISKCON, Hillsong and Ecumenical communities joined in to present with music their own faith perspectives, as a mark of tribute to a man who built a religion in the oneness of humanity.

It was their own version of naam japna, a Sikh meditation that involves contemplating the various names (or qualities) of God.

The Sikh faith itself places special significance on sacred music: the congregational singing of scriptural hymns (shabad kirtan) is central to the Sikh devotional experience. On this occasion, the kirtan was presented by Australia’s leading practitioners of the tradition, the Dya Singh World Music Group.

Other aspects of the Sikh religion were on display in abundance to the 4000 people who attended: sewa (service to humanity), kirt karni (earning an honest living) and vannd chakkna (sharing with those less fortunate).

In four heritage walks around the bay, Guru Nanak’s Udassiyan (journeys for the propagation of the message) was re-enacted in which the message was retold. The Udassiyan also found representation in artist Neena Mand’s exhibition of digital works, including other core values and texts.

4000 free vegetarian meals were served up as langar, including 500 to homeless persons. Presented jointly by the gurudwaras, local restaurants joined in.

Some 500 turbans were tied to willing participants, in what has become a mainstay at Sikh events as an exercise in cultural sensitivity.

A sum of nearly $6000 was raised for two charities Father Riley’s Youth Off The Streets and Can Too.

150 free health check-ups were carried out.

A special highlight was the welcome to the venue of eight cyclists who rode 300 kms from Canberra.

As each of these activities highlighted the message of Guru Nanak in one way or another, it was left to hip hop artist L-FRESH the Lion to articulate what many turban-wearing Sikhs do every day: Why Blend in When You’re Born to Stand Out?