The inaugural Light Up Your Homes competition gets heartening response 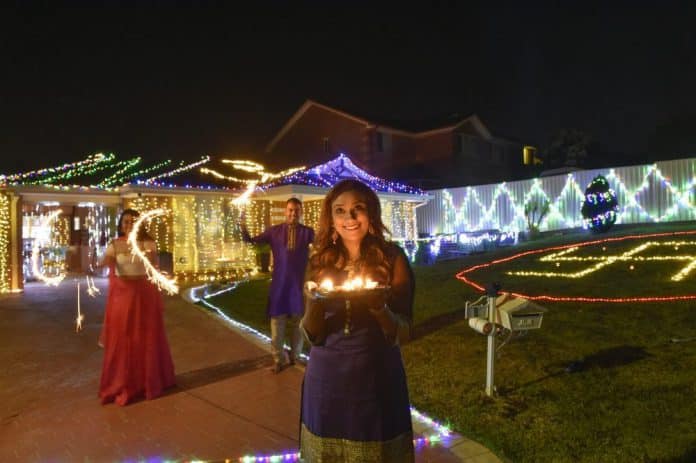 Blacktown resident Ajinesh Singh has every reason for an extended Diwali celebration – and perhaps another helping of some homemade sweets – after being declared winner of the Blacktown Diwali Lights Competition. It was the only competition of its kind this year in Australia.
For Singh, it was like celebrating the festival of lights with the entire community.
He said he was really excited when he heard about the competition. “This is our festival and we should promote it in the society we live. The more we do it, the more it helps our culture and also strengthens multiculturalism,” he said.

While many residents have been decorating their homes for Diwali over the years, the enthusiasm went up several notches after Blacktown City Council announced the competition. The Council claimed it was the first competition of its kind in Australia this year. It was held in association with Indian Link Media Group.
“For many years Council has held a successful Christmas lights competition. Diwali is one of the biggest festivals celebrated in our city, which is home to about 28,000 people of Indian descent,” Mayor Stephen Bali had said while announcing the competition.

There were close to 40 entrants in the competition’s very first year, a very healthy number.
Indian Link CEO Pawan Luthra was one of the judges for the final evaluation of the seven shortlisted entries. “Judging was done on various criteria such as whether the decoration had a Diwali feel, how the entire area of the property was utilised for the decoration, how innovative it was and how eco-friendly it was,” he said.
On 23 October, the council announced the results and Ajinesh Singh was declared the overall city winner – and got the $500 prize – while Vishal Sadhu and his wife, Dr Shamila, came in at second place.

Salina Saluja from Doonside, Sunaina Upadhyay from The Ponds and Jitendra Singh from Kings Langley rounded out the top five.
For Ajinesh Singh, who is originally from Fiji, doing up his home for Diwali is a cherished tradition. “I came to Australia in 2005 and moved to this house in 2006. My wife Shynia, daughter Tanya and I have been doing Diwali decoration at this house for 11 years,” he said, adding that they choose a different design each year.
Singh, an accountant, said he is all for preserving Indian culture for posterity. So, decorating home with – and for – his 15-year-old daughter was an added motivation for him.

The Singhs chose the theme of ‘peace’ this year. “We made an Aum and also a swastik symbol whose four arms and dots represent four virtues: Daan (charity), Shil (virtues), Tapa (austerity), and Samveg (nobility),” Singh said.
The whole decoration took two days, with all the family members, plus a couple of friends, chipping in. A perfect bonding activity before the festival!
It was a joint project for the Sadhus as well, and Shamila said it took them about a week-and-a-half to do up all the decoration. “We decided rangoli would be a great theme as it is a fixture during any festival. Therefore, we did all the common motifs such as diya, Aum, Lord Ganesha and the Kalash using lights,” Shamila shared, adding that all these symbols were used to welcome Goddess Lakshmi.

The couple painstakingly stuck the series of lights in the desired shapes on pieces of wood and then displayed them on the outside of their homes. Finding the right lights was also a challenge but in the end, the hard work paid off.
For Vishal, the excellent result in the competition brought back fond memories from Fiji, where he had also won a similar Diwali lights competition in 1995.
He continued the tradition even after arriving in Australia in 2003.

Shamila said that around Diwali there was a great atmosphere in Bungarribee, thanks to many people of Indian descent who live there. There was a lot of festive buzz in the community. “It felt just like home,” Shamila said.
Singh, the overall winner, echoed the thoughts. “The day of Diwali was a big celebration. We had 50-60 guests over to share our joy,” he said, adding that his wife Shynia made sweets from scratch.
The organisers couldn’t have been happier with the participation. Blacktown City’s Ward 1 Councillor Moninder Singh said the response was ‘tremendous.’ “Diwali’s aura in India is the same as it is for Christmas in Australia. India has a rich culture and this competition was the perfect showcase for it,” Singh said.

He added, “The spark of the idea obviously came from the Christmas lights competition and I am glad that Mayor Bali and everyone else in the council fully supported the competition.”
With almost 8% of Blacktown’s population having Indian descent, it was unsurprising that the competition got such a good response. “However, what was heartening to see was that the competition also brought diverse communities together. There was one participant in Parklea who had decorated her house for Diwali, and her non-Indian neighbour knocked on her door and greeted her,” Singh told Indian Link. “It’s great that Diwali is going mainstream in Australia.”

Blacktown Council also lit up its Civic Centre from 17 October to 21 October for Diwali. “There was a laser lighting show for Diwali as well,” Singh said.
Mayor Bali also said it was ‘fitting’ that Blacktown held the competition. “Blacktown is one of the most culturally diverse cities in Australia, being home to people born in 186 countries and speaking 182 languages. It is therefore only fitting that we should host Australia’s first ‘Diwali: light up your homes’ competition, fusing an Australian and Indian tradition into a mutual celebration of light and life,” he said.

“Seeing as we are the only Diwali light up your homes competition in NSW, we can truly call the winner the inaugural national champion! Yet another first for Blacktown’s thriving and vibrant Indian community. I thank everyone who took part and look forward to a bigger and brighter event next year,” he added.
We hope other councils are listening as well!