Next, a presidential contest between Modi and Rahul

No mercy can be expected from the electorate for the Modi government's failure to keep the promise of vikas or development, writes AMULYA GANGULI 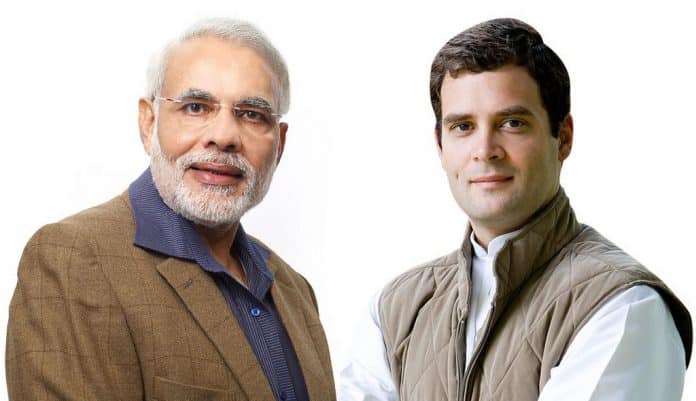 Reading Time: 4 minutesBy setting in motion the process of undoing the pronounced pro-Bharatiya Janata Party (BJP) tilt in Indian politics when the party secured a majority in the Lok Sabha and ruled at one time over 19 states, the voters of the three heartland states of Rajasthan, Madhya Pradesh and Chhattisgarh have sent out two unambiguous messages.
One is the old warning about pride preceding a fall. The hyperbole of the BJP president Amit Shah’s declaration that his party will rule for 50 years has been shown to be so much hot air as has been the observation of a loyal mandarin, national security advisor Ajit Doval, that the country needs a strong, stable government – obviously meaning Narendra Modi’s rule – for the next 10 years.

It was in keeping with these grandiose assertions that the BJP built the world’s tallest statue – of Congress stalwart Vallabhbhai Patel, whom the BJP can be said to have misappropriated from the Congress – and announced the plans for an almost equally large statue of Lord Ram.
But none of these achievements and claims have saved it from a 0-3 drubbing at the hustings. The lesson from this electoral whitewash of the three BJP-ruled states is that no mercy can be expected from the electorate for the Modi government’s failure to keep the promise of vikas or development. It is obvious that economic stagnation and agricultural distress have spelt doom for the BJP.

The second message from the results is that Rahul Gandhi has succeeded in exposing the falsity of the charges that had been levelled against him ever since he came into politics. Yet, neither being derisively called “Pappu” or an adolescent kid, or of being a “pathological liar”, to quote Arun Jaitley, had any effect on his emergence as a capable leader, who took the lead in addressing the media after the recent opposition conclave while veterans like Sharad Pawar and H.D. Deve Gowda remained in the background.
It is now obvious after the Congress’s success in Rajasthan, Madhya Pradesh and Chhattisgarh that Rahul Gandhi will increasingly be in the forefront of the mahagathbandhan (grand alliance) efforts, especially when the other major convener of the alliance, Chandrababu Naidu, has suffered a setback because of his Telugu Desam Party’s poor showing in the Telangana elections.
The taking of centre-stage by the Congress president is likely to turn the 2019 general election into a presidential-style contest between him and Narendra Modi. Up until last Tuesday, the BJP would have looked forward to such an unequal fight, in its view, between Pappu and the party’s hero with his macho image.
But no longer. Now, it will be a confrontation between the youthful standard-bearer of a rejuvenated party and the aging leader of an organisation which is seen to be on a slippery slope because of failures on several fronts – economic, administrative as the disarray in the Central Bureau of Investigation and the Reserve Bank of India shows, and an “inability” – whether inadvertently or by design – to rein in the Hindutva storm-troopers.
It is possible that these Hindu militants were let loose with one of the BJP’s chief propagandists, UP Chief Minister Yogi Adityanath, instigating them with his venomous Ali-Bajrang Bali communal polarisation because the party had been sensing for quite some time – presumably after its setbacks in Karnataka – that it was losing ground.

Seeing the receding mirage of the Hindu rashtra, which was thought by the saffron brotherhood to be within reach because of the BJP’s political clout, the Rashtriya Swayamsevak Sangh (RSS), purportedly a “cultural” organisation, jumped into the fray with its demand for the immediate enactment of a law for constructing the Ram temple.
Its calculation apparently was that the law would shore up the BJP’s sagging political fortunes by mobilising the Hindus behind the party. If BJP MP Subramanian Swamy is to be believed, it is the drive for Hindutva which enthuses the saffron cadres and brings in votes for the party, and not vikas.
But the ploy, which included a pledge by the RSS to revive the Ramjanmabhoomi movement of 1992-93 which led to the Babri Masjid’s demolition, failed to check the Congress’s revival and the signs of erosion of the BJP’s base of support.

Now that a presidential-style contest is on the cards, it will be advisable for Rahul Gandhi to live up to the lesson which he says he has learnt from Modi’s mistake – that of a lack of humility because “arrogance is fatal for a politician”.

While the Prime Minister has tweeted his acceptance of the people’s “mandate”, some of the spokespersons of the BJP and the RSS have been describing the Congress’s success in Rajasthan and Madhya Pradesh as “accidental” because of the marginal difference in the vote share of the two parties.
In Rajasthan, the Congress received 39.3 per cent of the votes while the BJP got 38.8. In Madhya Pradesh, the BJP’s percentage was higher at 41 compared to the Congress’s 40.9 per cent although the Congress won a larger number of seats.
The BJP is evidently unwilling to accept a result which has upended its dream of ushering in a Congress-mukt (free) India.
Amulya Ganguli is a political analyst.