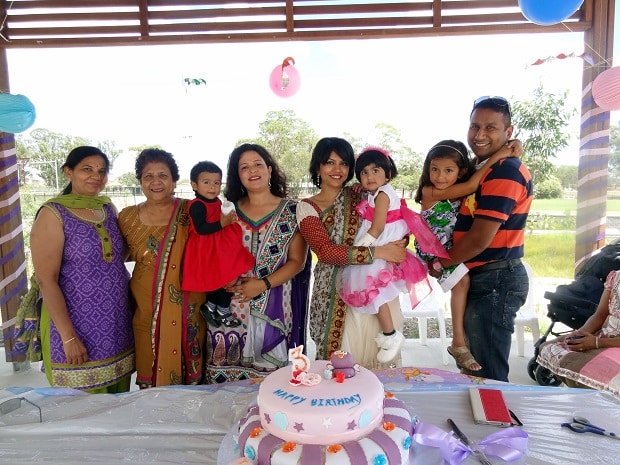 ‘Little drops make the mighty ocean!’ This is the only mantra ruling the life of Sydney-based single mum Sweety Makwana. Tirelessly reinforcing the adage every single day, she recently moved a step further towards her only goal in life, Mission Twisha Charity.

It was nothing short of a milestone for Sweety and Twisha, as this brave little girl celebrated her third birthday thanks to the generosity of the Indian community.

Twisha Makwana was born with a rare birth defect called Long Gap Oesophageal Atresia (LGOA), a condition in which the oesophagus or food pipe that connects the throat with the stomach, is incomplete. Twisha is unable to eat normally, through her mouth. She is fed baby formula and milk directly into her stomach via a tube. It is Sweety’s bravery and caring, and little Twisha’s fighting spirit and hope for life that has enabled her to reach her third birthday.

For Sweety, life has been tough. She was abandoned by her husband after being abused and victimised, and cruelly blamed for her daughter’s condition. Sweety is fighting this battle of survival on her own, shouldering a myriad of responsibilities, selflessly devoting her days and nights, comforts, health and other basics of life to ensure that her baby Twisha is kept healthy and happy. She has no time to look back and regret or question her situation; instead, Sweety courageously plods on. Her goal is to raise sufficient funds for Twisha to undertake a very expensive operation to cure her condition and one day, eat normally. The life-saving surgery, pioneered at Boston, USA, is Twisha’s only hope. The trip there and medical expenses will cost Sweety $1 million.

As she tirelessly fund-raises her way through, Sweety reveals she has reached the $180,000 mark (including pledges).

For her sheer tenacity and strength in the face of these extraordinary circumstances, Sweety Makwana won Indian Link’s inaugural Mother of the Year Award in 2013.

The Indian community has always empathised with Sweety and Twisha since the condition become known, and since Sweety began fundraising for her little girl. Once again last month, they rallied in a strong spirit of togetherness and enthusiasm to celebrate Twisha’s third birthday at Francis Park in Blacktown, where she was blessed with good wishes, donations and gifts from well-wishers.
Twisha’s birthday was a beautifully planned event, organised by volunteers from the Indian community who sponsored lunch, cake and decorations for the party. Yamini Thaker, a caterer along with a respected senior from the community, sponsored and arranged lunch for about a hundred invitees. Sweety’s housemate generously donated the cake, and well-wishers like Vaibhav and Rupali Rastogi showed support through liberal pledge donations of $5,000.

The party was enjoyed by all the attendees, and the laughter of children having fun echoed across the park.

“I am so touched at the generosity of my friends who organised the party,” Sweety told Indian Link. “To see Twisha so happy is all the encouragement I need, and I am thankful for them for making her happy! With their support, I hope to be in Boston with Twisha some day”.
The brave young mum and her daughter need every bit of assistance they can get. Let’s join hands and fight this battle together for a little toddler who has every right to eat, drink and crave for lollies like any other child. Every effort at fundraising brings hope and each penny counts; so the support, contributions and good wishes are truly appreciated. The community is urged to continue their efforts in helping Sweety and Twisha reach their goal.

Donors who would like to make or pledge a donation, please note the following: