Big boys and their toys 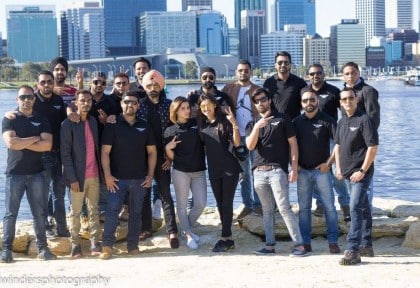 Life, in all its spirit of adventure, is meant to be enjoyed and explored to the fullest. For some travel enthusiasts, all that is needed is a motorbike!

Two and a half years ago Harman Johal of Perth bought himself a bike with the thought of traversing the beautiful outback of WA. But on second thought he realised it would be much more fun if he did it with a bunch of bike buddies. Together with his equally bike-mad friend Ajay Pal and two others, they set off on their first group ride to city beach.
“There was such a great feeling of camaraderie that we thought we must expand our group and find like-minded people to go on trips together,” Johal tells Indian Link.

Camaraderie? Hmm, that explains Hells Angels, and hey, our very own Yeh dosti, hum nahin…. from the iconic Hindi film Sholay.
But even though our Perth-based Jai and Veeru found many guys that owned and loved bikes, it would take them a while to get bikers to join.
But now, the Royal Indian Bikers Australia (RIBA) is well and truly growing, with a website and Facebook page. Members come from various backgrounds and different parts of India.
They ride together once a fortnight on Sundays. They are early beginners and start at 6 am – because, as they claim, wives call for attention and time too!

Their mean machines range from Bullet, Yamaha, Suzuki boulevard to Hunter, Hayabusa, Harley Davidson, Hyosung. They have toured Moore river, Mandurah, Two rocks, Toodyay, York, Mundaring Weir, Lake Leschenaultia, Serpentine.
They follow diligently the rules of pack-riding, such as having a lead rider and a tail-ender, keeping a safe distance from each other, staggered formation, looking after stragglers, ‘over-indicating’, and above all, trusting each other totally.

“Safety is very important for us; we’re very particular about jackets and gear and we promote safety on the road,” Johal says.
He reveals with a smile, “The camaraderie now extends beyond our little group. Many times, Aussie bikies greet us on the way; they like and appreciate our bikes as we stand around chat about bikes.”
The club charges a small fee which goes towards club promotions, towards raising awareness about men’s issues such as ‘eight ball’ (prostate cancer) and fund-raising for community members in need.

The RIBA boys are becoming a great showstopper when they rock up as a group at various local public events.
And of course they have their own events too, like family barbecues.
Soon they will be launching their own merchandise – the RIBA logo is a stunning graphic depicting the headlights and shocker of a bike.

Their dream ride?
“Driving down to Adelaide from Perth,” Johal replies without a moment’s hesitation, and adds, “Perhaps explore Leh-Ladakh in India.”
They might belong to different backgrounds but they share one thing in common – their obsession for bikes and that is what drives them together!