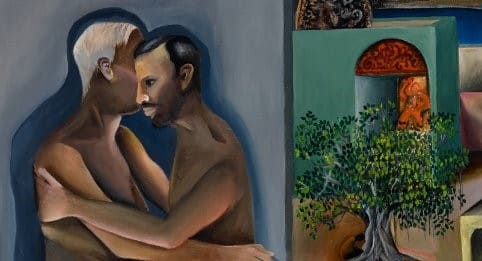 Reading Time: 2 minutes‘Two Men in Benares’, a 1980s painting by Indian contemporary artist Bhupen Khakhar has set a new auction record for the painter by selling at a whopping $3.2 million.
The sale took place at the Sotheby’s auction house earlier this week. Going under the hammer was the ‘Coups de Coeur: The Guy and Helen Barbier Family Collection’, an offering of 29 artworks from one of the finest collections of 20th century Indian art in private hands.
When Khakhar (1934-2003) first unveiled ‘Two Men in Benares’ in Mumbai in 1986, he became the first Indian artist to freely disclose his sexual orientation through his work.

The painting shows two naked men embracing. It “is the most explicit of what the artist himself called his ‘efforts to come-out in the open’, and to create a new iconography of homosexual love”, Sotheby’s said on their website.
Khakhar was India’s pioneering openly gay artist.
Widely considered among the artist’s best works, the painting later starred in Tate Modern’s 2016 ‘You Can’t Please All’ exhibition of Khakhar’s work, the first retrospective of an Indian artist to be held at the institution, according to Sotheby’s.
Other works of art at the auction included M.F. Husain’s ‘Marathi Women’ (1950) that sold for $553,146; a rare figurative work by Ram Kumar, ‘Untitled (Man and Woman Holding Hands)’ painted as a present for the artist’s wife in 1953, sold for $659,960.
The ‘Anatomy of that Old Story’ (1970) from Rameshwar Broota’s ‘Ape’ series also sold for $537,887.
Ishrat Kanga, Head of Sales at the global auction house said, “These exceptional results are a fitting tribute to the pioneering spirit of Guy and Helen Barbier, who passionately sought out exceptional examples of Indian art at a time when few others thought to.
“They collected with a ‘coups de coeur’, acquiring works that they truly loved and with a real commitment to discovering and celebrating Indian art.”
Another sale on Monday here saw Francis Newton Souza’s monumental Untitled painting being sold for $1.5 million.
Described by the artist himself as a “probable masterpiece”, the painting tells the Old Testament story of Susanna and the Elders – which has been rendered artistically in Europe, most notably since the European Renaissance.
IANS