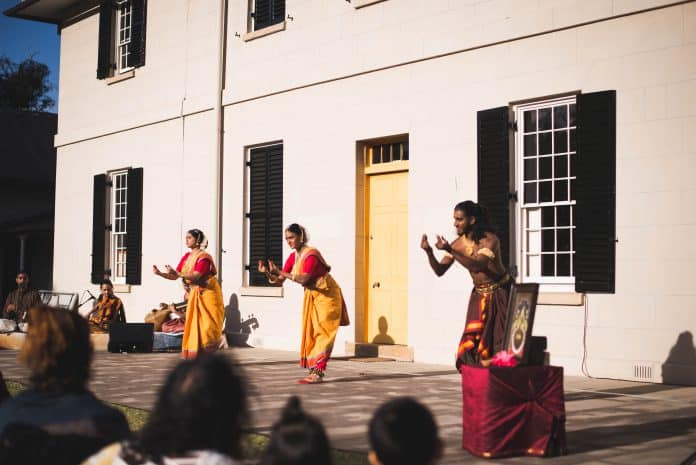 Seetha suffered considerably due to Rama’s over-adherence to dharma (righteousness), but stoically, she did not give voice to her torment. It was left for her to prove that she was pure. This she did to an astonishing degree by undergoing an Agni Pariksha (trial by fire). Still Rama yielded to pressure and banished her to a forest. There is no doubt though, that Seetha felt that Rama’s actions were unjustified. This formed a highlight of the evening of dance, music and words titled Bhoomi, Woman and Earth, organised as Sydney Sacred Music Festival. Produced and directed by Arjunan Puveendran and Indu Balachandran in late September, the event was staged in the outdoors at the Old Government House in Parramatta Park in Sydney.

Brightly dressed, Kersherka Sivakumaran in the item Dhumavathi, portrayed Seetha’s anguish using all the idioms of Bharathanatya, her movements spanning the entire stage. She knelt and wept, the anger burning in her face, as she gesticulated at an absent Rama: Idu en karmamao, idu un dharmamo? Is this my karma or your dharma?

Arjunan’s majestic vocal rendering of “Ramanai enna prananathanai” in Reethigoula raga heightened our experience. The violin accompaniment by Bhairavi Raman was especially noteworthy. Dance, music and lyrics all converged in this item as if they were made for each other. It was certainly effective in inducing a concern for Seetha and a blemish for Rama in the audience.

It is commendable indeed that this soul-stirring number was a creation of local Sydney-based artists, in terms of concept, lyrics as well as choreography. It was composed by Arjun while the lyrics were provided by Poorvaja and Nirmaleswara Kurukkal; choreography was by Kersherka herself.

In the number Chinnamasta, dancers Poorvaja Nirmaleswaran and Seran Sribalan depicted the destruction we impose upon our mother earth through our actions. One saw both hope and despair in the ending.  This was an item which relied entirely upon dancing alone, with no words accompanying, and was composed by Seran, Poorvaja and Indu. Indu provided a good backdrop on the veena.

Kali, a Thillana was again a local composition in raga Keeravani. Enacted by Kersherka and Poorvaja, this consisted of picturesque poses and brisk movement.

In Kamala, writer Shankari Chandran read a passage from her writing, drawing upon her life in Sri Lanka before she moved to Australia. She spoke of creating beautiful rangoli patterns outside her house every day, to beautify the earth. Invariably as the day went on, the rangoli was destroyed by ants passing through or people stepping over, but she was back again the next day, doing the same all over again. As she read, the audience got to see live rangoli patterns created in real time, live on stage, by participants Uma Sekhar and Abi Sivaraman. An interesting cameo, but one that, in my opinion, distracted somewhat from the powerful prose that was being presented.

Traditional Ragam, Tanam Pallavi was chosen in the item Bhairavi along with the words being read out in English to convey how we have interacted with the seashore, forests, plains, mountains and desert, and returned to earth a waste land of lost streams. Though laudable, the connection between the music and the reading was difficult to establish.

As well, the program included pure musical renderings which by themselves were enjoyable. Bhairavi brought out a pleasing Ranjani and Indu, an appealing Begada. Branavan Jeyarasa provided good mridangam support for many of the items.

As such, the connection to the upcoming Navaratri was unmistakable. The underlying theme of the destruction of Mother Earth was also in sync with the worldwide climate action being undertaken by youth participants the world over at that very time.

It is amazing that the young dancers and musicians, some of them born and raised here, are capable of composing art to bring out something they would like to tell us desperately, this time a concern for Bhoomi. It was a welcome feature when we note that most of our dances are but based on mythological themes.