16 weeks after it was vandalised, Bhartiye Mandir is set to reopen in February 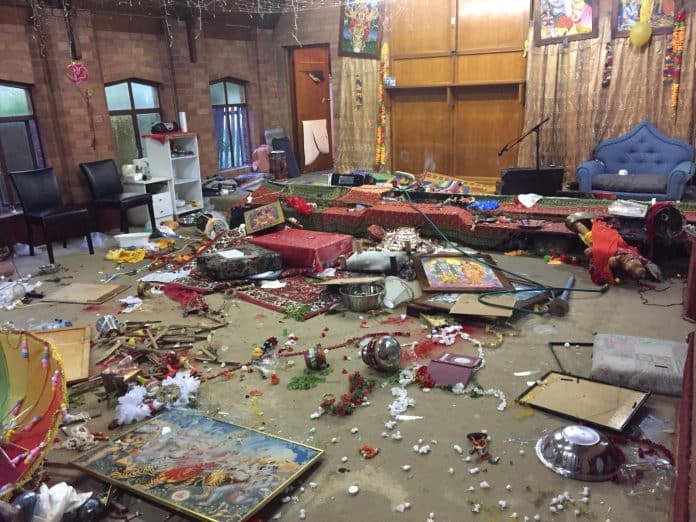 Reading Time: < 1 minuteLast year in October, the Hindu community in Sydney witnessed a shocking crime of vandalism that had left Bharatiye Mandir in ruins. The attack was condemned not just by the local communities, but also non-Indian citizens and politicians, including Prime Minister Scott Morrison.
After months of gathering the pieces and rebuilding the temple following donations from Cumberland Council and community members, the temple is ready to throw its doors open this February.
Indian Link spoke to temple priest Paras Ram Maharaj who confirmed the news. “Yes, we’ll open the temple to everyone on Saturday, Feb 2. Shanivaar ko murti sthapna aur mandir sthapna hogi (The idol will be placed in the temple). And on Sunday, Feb 3, we’ll be conducting a hawan.”

Temple after it was vandalisedPics: Bhartiye Mandir FB page
1 of 2

Maharaj also added that among those invited and expected are Premier Gladys Berejiklian and New South Wales Minister for Multiculturalism Ray Williams MP. The priest couldn’t reveal how much money had been raised to rehabilitate the place of worship, but wholeheartedly thanked community members for their donations, as well as Cumberland Council that had provided a majority of funds towards rebuilding.

Asked if there were any security measures in place, Maharaj replied, “Yes, we’ve installed CCTV cameras everywhere, there’s an alarm system in place and all the windows have been fitted with iron grills.” He added, “The rest, of course, is up to God.”
Welcoming the Temple reopening, Hindu statesman Rajan Zed, in a statement in Nevada (USA) today said that adequate security measures should be in place to protect the Australian Hindu population.
- Advertisement -
Share
WhatsApp
Facebook
Twitter
Linkedin
Previous articleFive lesser known gems in Thailand
Next articleThe Lucky Country needs to move forward