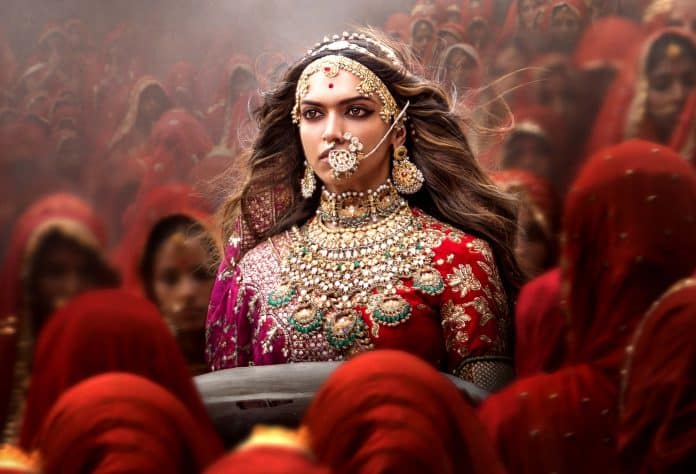 Reading Time: 4 minutesWith five edits and a slight name change to Padmaavat, the most expensive movie made in the history of Indian cinema finally hit cinemas around the globe on 25 January.

By the time you are reading this, Indian cinema fans will have got the chance to judge whether the controversy that shook the entire nation was worth the kerfuffle.
The film had been facing protests by the Karni Sena and other fringe groups over allegations that historical facts were distorted.
Embroiled in many controversies, the movie’s release was postponed only to be cleared by the Indian Supreme Court for a launch on 25 January.
The five modifications include a digitalised cover-up of Deepika’s midriff in the famous Ghoomar song so her stomach is not visible.
The one person, besides the maker Sanjay Leela Bhansali, who has high stakes in this magnum opus is the lead actor Deepika Padukone.
The talented actress braved threats of death and physical harm including brazen warnings to behead her and chop her nose amidst demands to ban the film.
Inspite of the controversies – or may be because of them – this may be the most pivotal project for the leading actor to further stamp her authority. Deepika commands a presence and prospects that have made her the highest paid actress in Indian film industry.
With a net worth estimated to be over USD $11 million, she has enjoyed three years on Forbes India’s highest-ranking Indian female actor list.

The stunningly svelte actor won many awards and a decent role in Vin Diesel’s Hollywood project, XXX: Return Of Xander Cage, last year.
As the decks were cleared for a nationwide and worldwide release of Padmaavat, Deepika sought prayers and blessings from God and love from her fans.
Preeti Jabbal: You have claimed that Padmaavat will be a game changer? In what way?
Deepika Padukone: It will definitely be a game changer. It’s not like we haven’t seen female-centric or female protagonists in Indian cinema before but what we haven’t seen is a film that is primarily driven by a woman, of this scale, grandeur and cost. The way the film has been mounted, it will be a first for Indian cinema.
PJ: What was the most exciting, remarkable thing about Rani Padmavati in your knowledge? What did you relate to most in her character?
DP: Her story was so exciting that I was highly motivated to enact that role. All the values that she stood for – her strength, courage, intelligence, vulnerability and innocence – were inspiring and very relatable. These traits are common to many women and should be celebrated.

PJ: The Ghoomar song broke many records. Share the experience of creating magic with the song.
DP: To begin with, you never set out with the intention to create magic but somewhere along the way, you enjoy what you do and you are honest to the moment that you are in. That’s when magic is created. The look and feel of Ghoomar had that extra special element.

PJ: How were the dynamics of working with Ranveer Singh as the anti-hero as opposed to the lead romantic role?
DP: It was very hard when you have been pitted against each other as die-hard romantics and then to be cast as someone who cannot bear the sight of the other, almost like a hate story. It was emotionally very difficult for me.
PJ: You have now filmed three magnum opus movies with Sanjay Leela Bhansali. How would you describe your experience with each of them?
DP: I think we have evolved to a point today we don’t need to communicate much. We look at each other and understand each other. There is a tremendous amount of honesty, transparency and trust that we share and that’s probably why he has given me this responsibility to shoulder.
PJ: Bhansali is a legendary director. Did you get an opportunity to implement your own sensibilities into the part of Rani Padmavati or was it entirely his making?
DP: It’s a collaborative process. Of course it is his vision but he also liberates his actors to bring in their set of skills and to make it their own. This is why our collaboration of three films has worked so beautifully. He enables you and gives you that feeling of freedom to create and do it in a way that you want to do it.
PJ: Where are you in your mind space prior to the release of this much talked about film?
DP: So excited for its release. I can’t wait to share this experience with everyone. It takes me back to the fact that it is going to be game changing and truly spectacular.
PJ: Future projects to look forward to?
DP: Shooting is expected to commence soon for my next film that is directed by Honey Trehan and produced by Vishal Bharadwaj. I am cast opposite Irfan Khan and the film is based on a true story.
PJ: What’s the future of women and women’s empowerment in Indian cinema now that you have managed to trigger the process to some extent?
DP: I see it opening a lot of doors. It was simmering anyway. For me, it’s sort of a statement for producers to know what is possible. I think we have placed the responsibilities on the men for a while and we are ready for the same with female protagonists now.