BAPS' divine and dazzling gathering for its guru 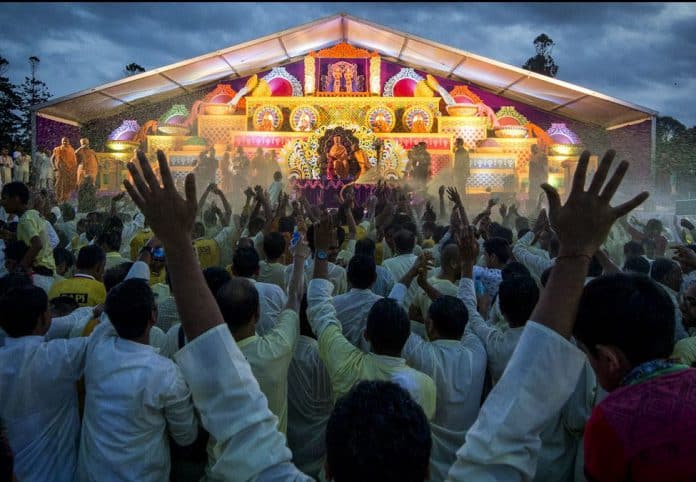 Reading Time: 4 minutesAs the Swaminarayan Sampradaya prospers throughout the world, the Sydney chapter, which has witnessed exponential growth in the last few decades, recently welcomed its guru and President Param Pujya Mahant Swami Maharaj. Swami Maharaj, who arrived on 3 Feb in the Asia-Pacific region and will be here until 17 April, led a series of events, including the inaugural vicharan, pushpadolotsav and bhumi pujan for the new temple premises.

In what was clearly a mammoth community affair, the dedicated volunteers had made elaborate arrangements for the event. Celebrating the time-tested tradition of BAPS Seva, planning and preparation had begun long before the actual events.
The formal welcome event, conducted in chaste Gujarati, also showcased the rich cultural heritage and diversity, with several presentations by children and youth, including a beautifully presented skit on the history of BAPS Sydney. In a fitting tribute, the young bhaktas raised $46,000 themselves.

“The event went off like clockwork, thanks to the commitment and dedication of our volunteers,” Praful Jethwa of BAPS Sydney told Indian Link.
“Through his vicharan, Swamishri expressed his wish to focus on further developing the Satsang in the Asia-Pacific region. With a total of 12 temples in the region and plans for more in the future, the Satsang continues to flourish in the region,” he added.

Sumptuous vegetarian meals, prepared entirely by volunteers, were offered to all devotees in the tradition of BAPS, as is now well chronicled around the world. The arrangements were impeccable, from the beautiful marquee and lavish podium to numerous volunteers coordinating the event and willingly assisting the devotees.
A high point of the event was the exquisite garlands that were presented to Swami Maharaj. Made from cardamom and fennel seeds by woman devotees, the garlands were indeed a labour of love and a humble token of thanks.

As part of the 2018 Asia Pacific tour, Swami Maharaj, or Pragat Satpurush as he is called, will visit Australia, New Zealand, Singapore, Hong Kong and Bangkok to nurture, guide, inspire and bless the Satsang in these countries.
The BAPS Swaminarayan Sanstha describes itself as a spiritual, volunteer-driven organisation dedicated to improving society through individual growth by fostering the Hindu ideals of faith, unity, and selfless service.

The backbone of the BAPS Swaminarayan Sanstha’s spiritual and humanitarian activities is its dedicated force of volunteers and sadhus. These volunteers and sadhus comprise a diverse group of professionals and skilled workers that come from different geographical, academic, and social backgrounds, resulting in an effective mosaic of leaders and workers.

Thousands of volunteers around the world serve in local centres. Many have professional careers and businesses, while others have left such positions to serve full time; they admirably balance their personal, family, social, professional and volunteer duties. Always willing to serve, these volunteers perform over 15 million hours of service annually. They are involved in physical service, planning, management and implementation.
“Our temple started out as a vision by His Holiness Pramukh Swami Maharaj, who shared his desire to one day set up a temple for devotees, not only from the Swaminarayan fellowship, but anyone who desired a better spiritual future. The vision has now become a reality, through endless hard work, dedication, and selfless pride by devotees in Sydney,” Jethwa added.