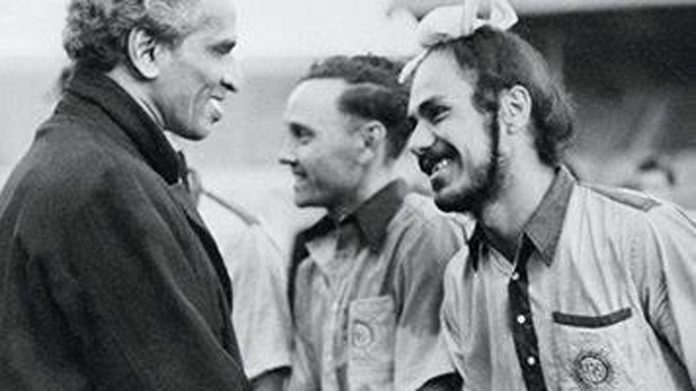 The old adage goes give him an inch and he’ll take a mile. As a prolific goalscorer, Balbir Singh Senior was exactly that. A legend who could sound the board from anywhere, the decorated former India captain was part of teams that won three Olympic gold medals.

Balbir breathed his last in a private hospital in Chandigarh on Monday. He was 96 and was in a critical condition for nearly a fortnight.

Part of India’s golden generation where the team bagged the 1948, 1952, 1956 Olympic gold and an Asian Games silver (1958), Balbir was one of the two surviving members from that famed team of ’48. His demise leaves Keshav Dutt as the only surviving member now.

“One can only remember him as the greatest goal-scorer India has ever seen,” Olympic gold medallist and former India defender Gurbux Singh told us.

Having played against him as a youngster at local tournaments, 84-year old Gurbux added that Balbir used to give little away but always had a calm head on his shoulders.

“They were our heroes. He (Balbir) was not very talkative. But he would hardly lose temper. His scoring ability was great. His hit was very powerful. He did not dribble a lot but would convert half-a-chance. As a defender, you could not give him an inch when he was inside the ‘D’,” said Gurbux.

So just how good a centre-forward was Balbir?

His record for most individual goals scored in an Olympic men’s hockey final remains unbeaten. Balbir had set this record when he scored five goals in India’s 6-1 win over Netherlands in the gold medal match of the 1952 Games.

On his Olympics debut in 1948 against Argentina, Singh scored six goals, another record.

India never missed the podium when Balbir was part of the team both as player, manager or coach. India’s only World Cup title came in 1975 when he was manager. In 1971, India bagged bronze in the World Cup when he was the coach.

Conferred with the prestigious Padma Shri in 1957, Balbir was also invited as a living legend for the 2012 Games in London. Balbir was the first sportsperson to be awarded with the Padma Shri.

Offering condolence to his family, Prime Minister Narendra Modi said: “Padma Shri Balbir Singh Sr. Ji will be remembered for his memorable sporting performances. He brought home lots of pride and laurels. Undoubtedly a brilliant hockey player, he also made a mark as a great mentor. Pained by his demise. Condolences to his family and well wishers.”

Spotted as a promising hockey player by Harbail Singh, who was the then coach of Khalsa College hockey team, Balbir took giant strides from an early age and was selected to represent Punjab University, which, at that time, covered colleges from a large region consisting of undivided Punjab, Jammu & Kashmir, Sindh and Rajasthan.

The Punjab University team clinched All India Inter-University titles with Balbir as the skipper three years in a row: 1943, 1944 and 1945. He was a member of the last team of undivided Punjab that won the title in 1947 National Championships.

In post-independent India, Balbir who had moved to Ludhiana with his family, was posted in Punjab Police. He captained the Punjab Police team from 1941 till 1961.