Light it up for autism 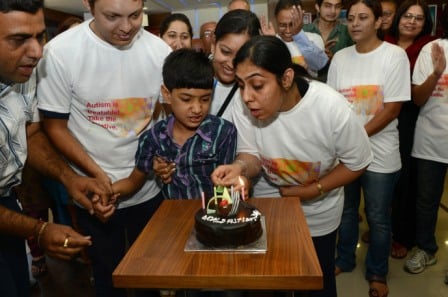 “When is your birthday? When is your son’s birthday? When is your husband’s birthday?” Ranjan likes asking his class teacher every time he sees her.
A whizz with figures, the talkative seven year old has fantastic recall and can rattle off dates, phone numbers and car registration plates in a flash claims mum Sandhya. Ranjan’s giftedness with numbers is however, undermined by a relative lack of social cognitive skills. At the age of three, Ranjan spoke very little. “Delayed milestones are quite common for boys and I assumed it was just such a delay,” explains Ranjan’s mum. But their son’s inability and unwillingness to make eye contact alerted his dad Sanjay that something was amiss.
And so began Sandhya and Sanjay’s tenuous journey into the unknown. Nearly a year later, Ranjan was identified as high functioning autistic (HFA) and they registered with Aspect NSW’s principal autism provider, for follow up support.
Ranjan is among an increasing number of Indian Australian children being identified as autistic. Literally meaning, ‘into one’s own self,’ such children are, in many ways, nuclear and isolated. The preferred term these days, is autism spectrum disorders (ASD) because of the highly individual and unique nature of each case, and overlapping of symptoms. Because of this ASD sufferers range from extremely ‘gifted’ to severely ‘challenged’.
Unravelling autism
Triggered by a neurological disorder that sets in by the first three years of birth, ASD is a lifelong developmental disability, ‘characterised by marked difficulties in social interaction, impaired communication, restricted and repetitive interests, stereotypical behaviours and sensory sensitivities’. Broadly, researchers agree that ASDs could include Autism, Pervasive Developmental Disorder and Aspergers Syndrome. These conditions share some of the same symptoms, but differ in terms of when the symptoms set in, how severe they are, and the exact nature of the symptoms.
Global epidemic
A relatively rare phenomenon even four decades ago, autism has transformed into a global health challenge, prompting governments to increase research funding and put guidelines into place for better therapy.
On April 2 this year, in celebration of World Autism Awareness Day and in a collaborative effort to turn the spotlight on autism, iconic buildings around the world were lit up in blue.

One in 100 children in Australia are autistic. In India, there has been a staggering ‘six-fold increase’ in the new millennium, according to local media forecasts. From an estimated 20 lakh cases in 2003, there are reportedly 10 million autistics at present.
On April 2 this year, World Autism Day, Krishna’s fourth book, Why Me? An inward Journey, was released by the Chief Justice of Supreme Court. His previous books Wasted Talent, How Krishna Broke Free of Autism and From a Mother’s Heart – A Journal of Challenge, Survival and Hope document the inward odyssey.
Accessing funded care
For autistics in Australia however, it is not all doom and gloom. A lot can be done, and has been done. While it is expensive, early diagnosis and appropriate intervention can facilitate better management and eventually get the child to be a fully functioning member of society. Dr Chitra Chandran is a Melbourne based paediatrician, who specialises in behavioural and developmental disorders. “While developmental disorders have existed for many years, autism spectrum disorders are being increasingly recognised. This has led to [an] increasing number of families seeking assistance,” she says.
So what causes autism?
A hotly debated issue, autism has been attributed to many things from immunisation to additives and pollution. While conclusive research still needs to be done, genetics clearly play a role. “It’s good to know one thing that it is no longer debated at all – that parenting styles do not cause autism,” Jordan gladly acknowledged.
Early intervention
Currently, mainstream medical methods combine speech therapy, physiotherapy, occupational therapy, behavioural support, play therapy, special education and counselling. After intensive sessions tailored on the individual need, children are integrated into the preschool system, often under the supervision of special educators and trained aides.
School setting
Once therapy structures are set in motion, most children are integrated into mainstream schooling, depending on their intellectual abilities. There are also some autism specific schools for the more severely challenged children. Additionally, the private sector caters to this growing demand by offering integrated resources. One such school is Macquarie University Special Education Centre (MUSEC), which offers a tailored curriculum at the primary school level.
Adapting to autism
Many parents have to ‘unlearn’ their natural parenting instincts, and instead don a ‘special-parent’ avatar. Most autistic children have sensory integration issues (hyper or hypo-sensitivity to textures, sounds and motion). Some children are easily and uncontrollably excitable, so parents are taught to help them use ‘quiet hands and voice’ and get them to wear ‘weighted’ jackets to calm them down.
Applied behavioural analysis (ABA) therapy has been the buttress therapy for most families, focusing on specific issues like eye contact, playing with peers or following classroom structures.
Creating a support structure
Coping with autism can be quite a rollercoaster, taking its toll on marital harmony and family structure. And it can be even harder on minorities. This is why more effort needs to be made by the community as a whole, and educators and health specialists in particular, to reach out to these vulnerable people. Akila Ramarathinam has not only helped her daughter Santoshi through the difficult diagnosis of autism, but has now reached out to many in the community. “When my daughter Santoshi had severe speech and language disabilities as a two-year-old, I was totally devastated,” she candidly admits. Like most Indian mothers, “why me? What have I done wrong to deserve this” was her immediate reaction.
Social stigma
While it is not uncommon for developmental milestones to be ignored or overlooked, often cultural and social stigmas about mental health and a fear of talking openly, or seeking information and help for the child prevents migrant families from admitting such issues. Many often hope against hope that the child will just grow out of it.
“Being the parent of a disabled child is not something to be ashamed of, is it?” asks Juhi. The Brisbane-based mother of two finds there is still a huge amount of stigma that parents face in accepting autism. “I know several Indian parents who have autistic kids, but deny it in the community with the hope that the kids will just grow out of it”.
Disclosure
The issue of disclosure is a hurdle many parents prefer to avoid, and justifiably so. Already saddled by a weighty responsibility, most are uncomfortable disclosing the disability to an extended social group. Melbourne-based author and campaigner Amanda Curtis strongly advocates disclosure. “Once my son’s classmates knew why he was different and why he was disruptive, they stopped being unkind to him. A lot of the mothers also came up to offer support. Initially though, I was worried what the reaction would be,” she reveals.
Alternative therapies
Many autistics also suffer from a variety of food allergies, including eggs, nuts, dairy and wheat. It is believed that certain foods triggers toxicity in their bodies, which in turn affects the neurobiology. This is where homeopathy and Ayurveda are increasingly adding value to their lives. “Working in conjunction with mainstream treatment structures, homeopathy takes a holistic approach, by working on the physical as well as emotional problems,” claims Jordan. Her holistic practice in Sydney’s Northern Beaches has treated patients for the past twenty years.
Summary
Through early diagnosis, better teacher training and autism-friendly teaching programmes, a seamless transition into higher education and the workforce is achievable. While the future may look uncertain, it is heartening to note that many adults living with this disorder have carved out fulfilling lives.
Meanwhile an Australian cooperative research centre (CRC) for people living with autism disorders is in the offing, funded by public-private partnership. Harnessing the combined research of professionals in the area, the Autism CRC hopes to deliver comprehensive solutions to both government as well as service providers in the health and education sector.
Resources:
- Advertisement -
Share
WhatsApp
Facebook
Twitter
Linkedin
Previous articleHey diddle diddle
Next articleBuilding relationships via cricket