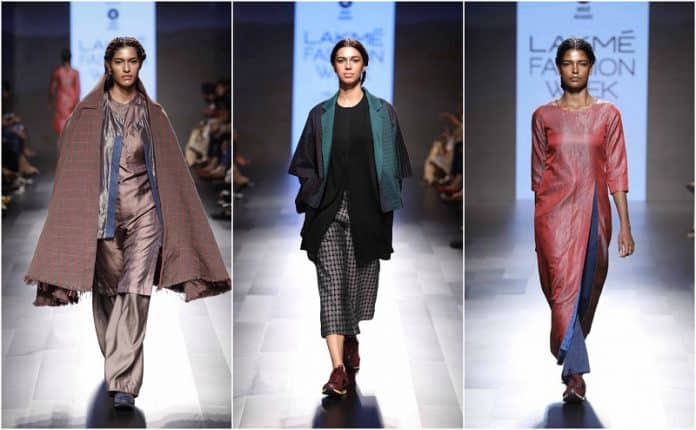 Indian designer Gaurav Jai Gupta used Australian home-grown Merino Wool as one of the fabrics in his line show at LFW Winter/Festive 2017.


Australian High Commissioner to India Harinder Sidhu feels that when two nations are forging a relationship they usually talk about political, diplomatic or economical tie-ups but what matters most is the link between people.
Sidhu says Australian Foreign Minister Julie Bishop emphasises on creating bonds through “fashion diplomacy” and India is one of the countries that tops the chart.
“We have been looking at different ways of building relationships with India. A good relationship has many levels to it and for the first time we have a female Foreign Minister who is very keen on fashion diplomacy, and this is the term we are taking forward,” Sidhu told IANS on the sidelines of Lakme Fashion Week (LFW) Winter/Festive 2017, in Mumbai.

“It (the association through fashion) has been incredibly successful. I feel that not just fashion brings people together but it’s also a very large industry in its own right.
“Australia is one of the big producers of products like cotton and wool and India is home to a great deal of creativity and I think these collaborations are cementing the whole dimension of relations between the two countries,” she added.
Sidhu was in Mumbai to support designer Gaurav Jai Gupta of the brand Akaaro.
The designer’s show, that was supported by the Australian Foreign Affairs and Trade departments, used Australian home-grown Merino Wool as one of the fabrics in his line.
Asked about the relationship between the two countries, Sidhu said: “I think a lot of time when we talk about relationships between two countries, we talk about political, diplomatic, economic or trade relations.
“All these things matter a lot but what is glue between two countries is actually the link between its people.”
“How we grow to understand each other better when we are together in collaboration matters a lot,” she said.
So will there be more associations with Indian designers?
“I am staggered by how much talent India has. I think absolutely. We have a coupe of collaborations already and we are prepared to be more adventurous and really reach out a lot more.
“Few collaborations that we had, led to deeper understanding of both the countries. And Australians now are much more comfortable working with Indian designers as they are really making their mark,” she told IANS.
Sidhu also added that the Indian population in Australia is “growing very fast and that is building more and more people connection.
“Australians are thinking about Indian places to collaborate in all fields. I think the relationship between Australia and India is stronger than ever now.
“Australians are making movies about Indian experiences, many more Indians are going to Australia for study and vice versa. So at many layers this relationship is improving deeper and deeper,” she said.
– IANS